BOU AAN LIEFDE, the official theme song of the new Afrikaans film Uitvlucht will be released during the week of 8 February 2016. 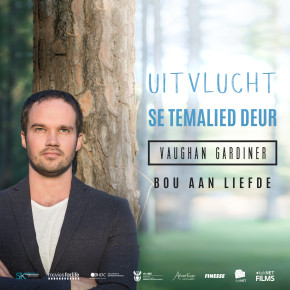 On Monday 8 February the song will be played for the first time at 20h00 on GrootFM and on Tuesday 9 February BOU AAN LIEFDE can be heard on kykNET.tv for one day only. Thereafter, it will be released to radio stations nationwide.

“It’s an unbelievable privilege to have this song in Uitvlucht,” says Vaughan.“Alishia van Deventer from Starburst Promotions contacted me and asked whether I would be interested to write the theme song and also to sing the song.”

Uitvlucht is director and producer Regardt van den Bergh’s new film and is a drama that tells the story of Anna (Clara Joubert van den Bergh) who loses everything in her life due to a wrong decision and subsequently finds work on the farm school, Uitvlucht.

With the support of other teachers and Dok (Stian Bam), a kind farmer who visits the school and befriends her, she learns to forgive herself and starts accepting that someone might be able to love her again.

She also becomes involved in the school children’s lives and their pain and tries to offer them salvation.

“My wife Nerine and I saw the rough cut of the film and immediately knew what the feel of the song should be. She started writing the lyrics and I found it really easy to write the right melody for the film, as it is a movie that you don’t simply watch, but also feel,” says Vaughn.

Uitvlucht is a story of hope, mercy and of a love that conquers everything.

Uitvlucht releases on 13 May 2016 in South Africa and is distributed by Ster-Kinekor Entertainment.