The total value of all developed real estate on the globe reached US$217 trillion in 2015, according to calculations by international real estate adviser, Savills, which is represented in Africa by Pam Golding Properties.

Issued for the first time, the analysis measures the entire developed property universe including commercial and residential property as well as forestry and agricultural land.

According to Sandra Gordon, senior analyst for Pam Golding Properties Research, here in South Africa a recent ABSA report indicates that in the second quarter of 2015 the total value of South African residential property was R4 155 billion, which at the current rand/dollar exchange rate represents approximately $260 billion.

Yolande Barnes, head of Savills world research, comments: “To give the global figure context, the total value of all the gold ever mined is approximately US$6 trillion, which pales in comparison to the total value of developed property by a factor of 36 to 1.

“The value of global real estate exceeds – by almost a third – the total value of all globally traded equities and securitised debt instruments put together and this highlights the important role that real estate plays in economies worldwide. Real estate is the pre-eminent asset class which will be most impacted by global monetary conditions and investment activity and which, in turn, has the power to most impact national and international economies.”

In recent years, quantitative easing and resulting low interest rates have suppressed real estate yields and fuelled high levels of asset appreciation globally. Investment activity and capital growth has swept around the major real estate markets of the world and led to asset price inflation in many instances.

The Savills report says that overall, the biggest and most important component of global real estate value is the homes that people live in, totalling US$162 trillion. The sector has the largest spread of ownership with approximately 2.5 billion households and is most closely tied with the fortunes of ordinary people. Residential real estate value is broadly distributed in line with the size of affluent populations: China accounts for nearly a quarter of the total value, containing nearly a fifth of the world’s population. Yet the weight of value lies with the West – over a fifth (21 percent) of the world’s total residential asset value is in North America despite the fact that only five per cent of the population lives there. 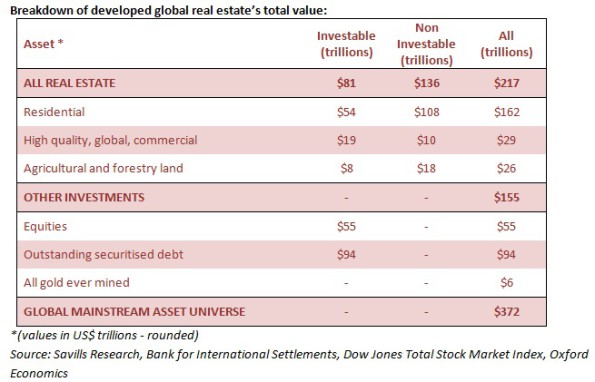 The trend for western nations to dominate real estate is most pronounced in commercial markets, where nearly half of the total asset value resides in North America. Europe makes up over a quarter while Asia and Australasia contain 22 per cent, leaving just 5 per cent for South America, the Middle East and Africa.

Role of housing in developing economies

Notably, says Dr Andrew Golding, CE of the Pam Golding Property group, the report highlights that the growth of residential real estate value in Asia illustrates the role of housing in developing economies. Its growth means there is now more collateral in the personal finance and small business sector of these countries. If African residential real estate markets were to develop in the same way over the next decade or two as the Asian markets (excluding China) have, this would add $5.8 trillion to the global total.

The global potential for economic development to impact on residential real estate is huge. A growing middle class and growing home ownership in areas of economic growth will increase the size of residential property as an asset class. If residential property in Middle Eastern, African and Asian countries were to move towards the global average per head of population, this would increase global residential asset values by 32 percent or $52 trillion.

There are big rewards for the super-opportunistic investor. While emerging economies will always be seen as higher risk, the fundamentals of economic growth with strong demographics will undoubtedly increase demand for housing, workspace and retail/leisure space in population centres. This will create compelling opportunities for those able to deploy capital into the right types of real estate.

Not included in the global calculation is the value of informal neighbourhood commercial properties: workshops, workspaces, shops and small business premises which are not part of the high quality commercial real estate universe that constitutes global property markets, but which are important components of economic growth and prosperity, especially in emerging markets.  They are almost impossible to value at a global level but have huge potential for future investment as economies mature and real estate markets develop within them, adding to the global stock.

This year, for the first time, the value of agricultural land and forestry is also included in the Savills measurement of total world real estate at an estimated US$26 trillion, of which around 30 percent is corporately and institutionally invested.  Most agricultural and forestry land is owned by non-investing entities, operators and occupiers, especially in emerging economies where this is a sector with great potential for further growth and investment.