It’s fast, it’s furious and it’s addictive. Cross triathlons, meaning offroad, are fast becoming a very popular option to get away from the tar beating, traffic dodging, urban-pollution-sucking option of your traditional tri’s. 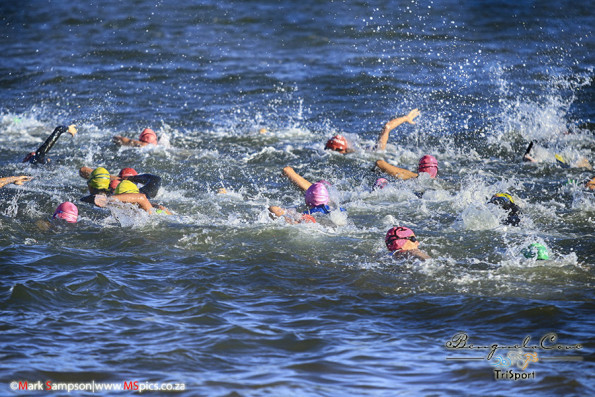 Now, a new and even more enticing, sprint option is emerging – faster, quicker, shorter. And why not? On Saturday the 6th of February TriSport organised a sprint and ultra sprint cross tri at the magnificent Benguela Cove Wine Estate on the shores of the Bot River lagoon just outside of Hermanus. A sprint triathlon is basically a T20 in Cricket version of your normal triathlon. Shorter and more manageable, it has something for everyone, whether it be your seasoned pro looking to test their speed work, or a newbie coming into the sport wondering what all the hype is about. It offers the perfect setting, professionally organised, with fellow like-minded athletes. 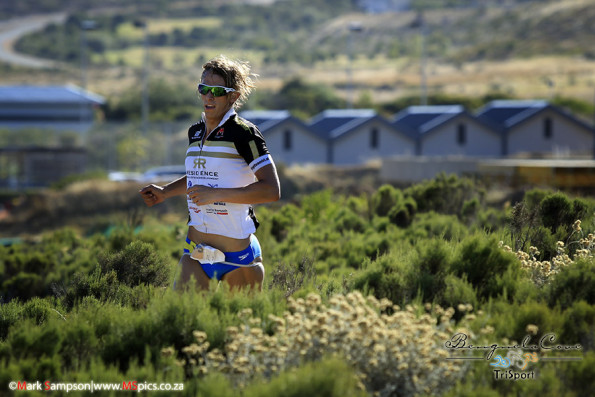 The sprint option took competitors on a private tour of the estate starting with a 950-metre swim in the saline waters of the lagoon. They then covered a two-loop, 17 kilometre-long, mountain bike ride through the vineyards of the estate back to transition. The final discipline of trail running covered 4,5 kilometres of pristine trails along the edge of the lagoon to loop back through the vineyards, overlooking the lagoon, back down to the finish line to receive a finishing medal. 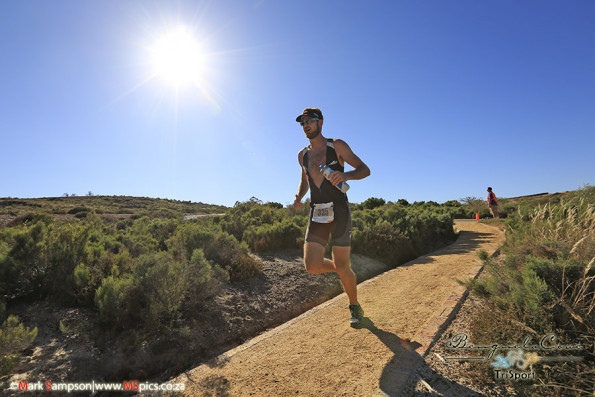 The ultra sprint, primarily aimed at allowing competitors a view into the world of offroad triathlons, offered the much of the same but in shorter more manageable distances. The swim was 500 metres, mountain bike 8,5 kilometres and run and an easy 2-kilometre loop.

Near perfect conditions saw the competition for the sprint distance being hotly contested by pro athlete Lieuwe Boonstra and Jean-Paul Burger. With Boonsta leading most of the way Burger slowly reduced the lead as each discipline reached completion. At the end it all came down to the final 100 metres along the beach finish, next to the lagoon, in a sprint finish where Burger managed to take first place by 1 second. His winning time was 1:07:25 with Boonstra 1 second behind and Dylan Jano coming in a commendable third place of 1:12:13. The female category was won by Rita Terblanche in an impressive time of 1:23:57 followed by Elna Fourie and Francis Mathee in third position.

The ultra sprint version really saw the pace go up a few notches with athletes crossing the finish line in record speed. Dean Hopf crossed the line first in the men’s category in a time of 0:36:29 followed by Berno van den Berg and Ruan Weyers. The ladies race was a real humdinger again coming down to the final few hundred metres with only 18 seconds between first and third spot. Stephanie Cherry took the honours in 0:53:32 followed by Nicole Hellinger and Hanneen van der Stoep.

With the Kogelberg Nature Reserve overlooking the Bot River lagoon as a backdrop and the local produce from the estate flowing freely, prize giving was a festive occasion. And with that it was all over, an idea conceptualised by Hano and Sonja Otto, brought to life with the support of Benguela Cove Wine Estate seemingly hitting the sweet spot of the serious, and wannabee, tri-athletes alike. Sprint tri’s are here to stay so look out for the next instalment of activities happening later in the year at Benguela Cove Wine Estate.

For more information and complete race results go to www.trisport.co.za