Three generations of the well-known Richards swimming clan will line up at the 92nd SPAR River Mile Festival at Cannonville outside Port Elizabeth later this month. 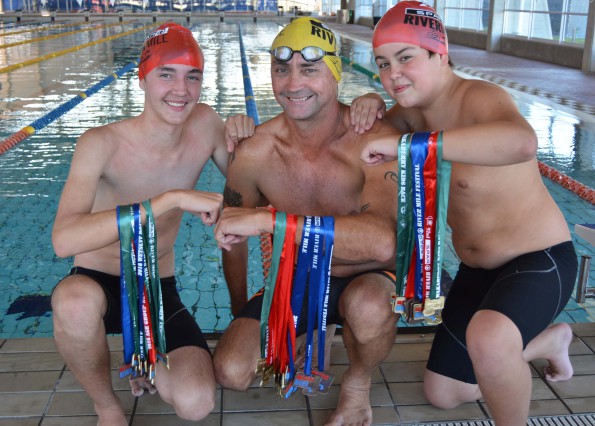 As has become customary, the 82-year-old Mally Richards will be surrounded by family when he takes to the water for the 63rd time on February 21.

Joining him this year will be his son Kevin, a former six-time winner attempting his 30th mile, and the latter’s sons Sean (17) and Marc (14).

A Springbok swimmer, lifesaver and triathlete in days gone by, Kevin, now 52, swam his first mile at the age of nine and collected his debut title at 14.

“I have had my fair share of competitive swimming,” said Kevin, who won national titles in the pool from 1984 to 1986.

He also held South African records in the 100m and 200m backstroke events before switching codes and becoming national triathlon champion in 1993.

“But now I only swim for enjoyment and to stay in shape,” said the man known as ‘The Fish’ during his triathlon days. “It is a lifestyle for me.”

Race director Michael Zoetmulder of Zsports said the only other six-time male winner was Geoff Grylls, who managed to do so consecutively.

“Both Geoff and Kevin’s achievements are remarkable, but the Richards family’s participation and passion over many decades represents the very nature of this event.”

Zoetmulder said the seventy-three-year-old Ant Skinner, another veteran of the race, will also line up on the grassy shores of the Sundays River.

“He grew up in Redhouse where the first one took place almost a century ago, so he literally grew up with it.”

SPAR Eastern Cape marketing director Abri Swart said it was their 17th year of involvement in what has become one of the region’s best supported family festivals.

“Not only does it epitomise SPAR’s family and lifestyle culture, so do people like the Richards.”

Zoetmulder said the two-day programme not only offered swimming events for all ages and ability, but catered for runners and triathletes as well.

He said the food and craft stalls, which were carefully selected, were another family highlight.

The festival, which gets underway on February 20, supports the Smile Foundation and Cleft Friends.

Gates open at 8am and entry is R20 per person.

Enter at www.rivermile.co.za now or find SPAR EC in Action on Facebook.