New Cape Town band Slow Jack has caught the attention of music lovers and media at the annual Up the Creek Music Festival near Swellendam in January. It was their second gig as a band and they filled a mainstage slot on the Saturday of the festival with fresh, catchy tunes and exuberant charm. Their debut single ‘Love to Dream’ was released to national radio in January and is now available for FREE DOWNLOAD here: http://www.slowjackmusic.com/ (until 20 March.)

The band also filmed and recorded a live version of ‘Love To Dream’. Watch it here: https://www.youtube.com/watch?v=0mtaZDec1NA 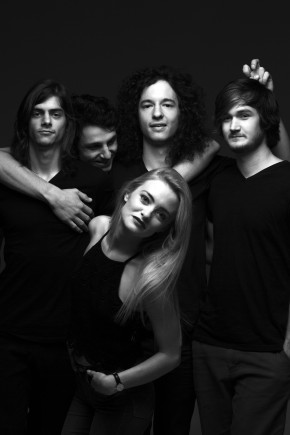 ‘Love to Dream’ is a story that people can relate to and was stringed out by Hannes and Jayme early one Saturday morning in Sea Point. Each bandmember then contributed something notable to the final architecture and unique sound of the song during rehearsals.

Muller comments on the making of the single: “Writing is emotional for us. The experience sets the mood; the lyrics tell the story and what follows sets the scene. Although the initial songwriting may take only a few minutes, it is the refinement that take hours or even days. All in all hard work, but we have a lot of fun while doing it.”

The idea of a live studio video was born soon after the song was recorded. Muller adds: “Whilst people do dream in colour, we decided to shoot the video in ‘black and white’ as we felt it would reflect the mood of the song so much better.”

Listen to the single on Soundcloud:  https://soundcloud.com/slowjackmusic

“Slow Jack is probably highest on my list of bands to watch for 2016. Their melodic get up and jump sound was incredible. The hauntingly beautiful voice of the female lead singer Jayme van Tonder, complemented by the pop rock melodies of the band blew us all away. Lead singer Hannes Muller oozes stage presence with such ease that he had the crowd twisted around each note plucked on his electric guitar.” Grant Mc Pherson. http://withoutadoubt.co.za/2016/02/up-the-creek/

“I watch as newcomer to the local scene, Slow Jack, takes its place upfront and launches into a delicious medley of pop rock infused future radio hits. The band has an infectious chemistry on stage — particularly guitarist and vocalist, Hannes Muller, and violinist and vocalist, Jayme van Tonder, who stands out like an ethereal siren in an ocean of salivating soon-to-be fans. I descend from my trusty tree branch and walk away, counting myself amongst those new fans.” Nick Frost. https://medium.com/@nick_frost/up-the-creek-on-fleek-bacf7446c074#.sv0q17mm0

Slow Jack is working on an EP release for Winter 2016. Watch their space!