DOMINATES TOP 20 – Fancourt is pleased to announce that their Links course has once again been ranked 1st in the Golf Digest ranking of South African golf courses for 2016.  No stranger to this prestigious accolade, the course was awarded this title in 2011, as well as 2014, and has once again clinched top spot. 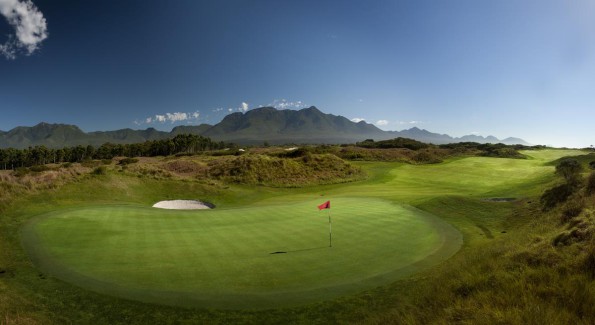 Whilst competing against a number of other highly reputable golf courses to receive this recognition most notably is that the Estate’s other two golf courses have also been named in the 2016 rankings.  Whilst the Outeniqua course has moved from 17th to 16th position, Montagu retains its 6th position.  This brings all 3 courses into the Top 20.

The Golf Digest rankings are a long established and reputable award, offering recognition of a certain standard that golfers can depend on.  The bi-annual evaluation of all countrywide 18-hole courses is based on course evaluations by volunteer panel members from across South Africa. Courses are scored on seven criteria: Shot Values; Playability; Resistance to Scoring; Aesthetics; Design Variety; and Memorability – with each course achieving a total score out of 100.

The Links is not only ranked the top course in South Africa, but is also the only course in Africa that has once again been certified as an Audubon Cooperative Sanctuary, a USA-based standard, as a result of its commitment to the protection of the environment and preservation of golf’s heritage.  In keeping with its Scottish inspiration, players are quite in awe of this magnificent course, as designer Gary Player considered everything typical of its origins.

Lloyd Martindale, GM of Golf at Fancourt commented ‘It is wonderful to receive this accolade again. It serves as testimony to the commitment of the Fancourt team and our goal to maintain the absolute best standard in the country. The rankings not only reflect the well thought out designs of the three courses but also the team of professional and hardworking greenkeepers; we are extremely proud of them.’

Fancourt boasts several titles such as The Most Luxurious Boutique Hotel for their Manor House, as well as Tripadvisor’s 2016 Traveller’s Choice ranking of 13th in the Top 25 Luxury Hotels category in South Africa, meaning visitors can expect a very high standard on and off the course as well.

The resort has two accommodation offerings: