Louis Oosthuizen’s calibre was proven at the Perth International on Sunday, where the world number 21 shot 71 in the final round to win by one stroke. 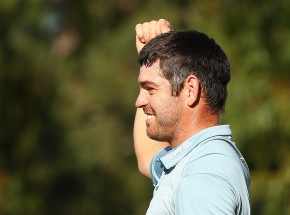 He left the competition to do the work after blazing to the 54-hole mark with a Friday 64 and Saturday 65, and then on Sunday played solidly enough to deny them a chance.

The 2010 Open Champion was pleased to get a victory under his belt ahead of his American-based preparations for the Masters.

‘It’s been two years since I had a win so this is massive for me going into the season,’ he said. ‘I’m flying tonight and playing Doral next week so hopefully, I can take a lot out of this and play well.’

Oosthuizen, who is Compleat Golfer’s Playing Editor, took Ernie Els’ advice to play in Australia this week. He’ll certainly be back.

‘I love Perth and the golf course,’ he said. ‘It’s somewhere I would love to come back to. It’s a great course to play.’

Ulrich van den Berg made his first cut of the European season this week and shot 70 on Sunday to tie for 38th place on four-under.