Mazda’s zoom zooming to the top of the charts, if the all-new Mazda2 is any indication.

Brian Joss – I’ve just completed a 3 000km road trip in the Mazda2 1.5 diesel with automatic transmission from Milnerton to Johannesburg and back through the Klein Karoo with an overnight stay at the Miller’s House in Prince Albert, the gateway to the Groot Karoo. And the Mazda2 didn’t stutter or stumble, not even once.

The engine of the SkyActiv-D was first shown at the Geneva Motor Show in 2014, along with the Mazda Hazumi (tested), and in fact the Mazda2 shares much with the 2.5 litre CX-5, Mazda6 and the Mazda3. The turbo-charged 1.5 puts out 77kW and 250Nm and the test car was fitted with the all new six-speed automatic transmission. It’s also the fourth model and the first sub-compact to join the new generation vehicles that have adopted the KODO – Mazda’s Soul of Motion design language and the full range of SkyActiv technology. 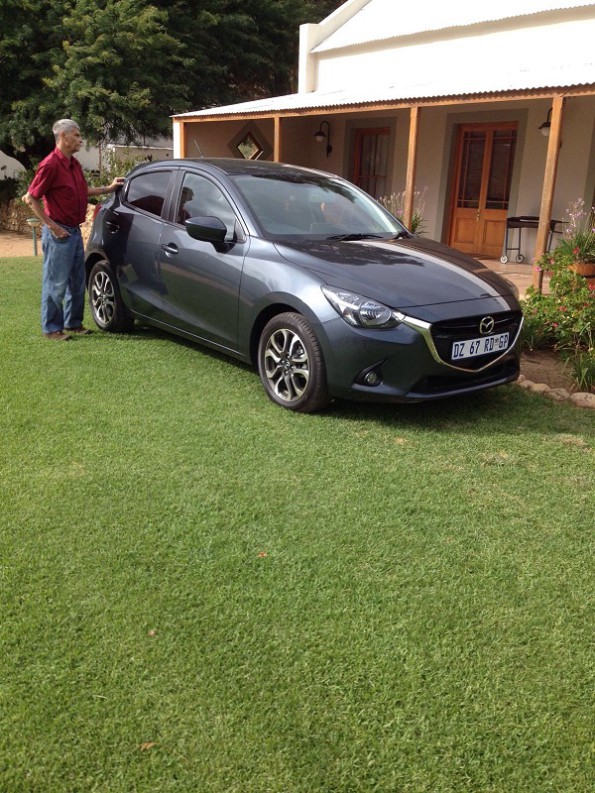 It’s hard to believe I was driving a diesel: the motor is quiet, even when it idles and there is no turbo lag to speak of, at least not that I could detect. According to Mazda the torque on the CX-2 is equal to that of a 2.5 litre petrol engine. And I can  believe it. The road to Jo’burg is paved with trucks and trucks of every size and description ferrying all sorts of goods and I had no problem overtaking them, when it was safe to do so.  At no time did the Mazda2 hold back, even when I had to pass three at a time. Which wasn’t that often. The drivers were also courteous and most of them moved over on to the shoulder.

Others of course acted like road hogs: the Beamer and Audi drivers especially, and I learnt on this trip that Arrive Alive’s message “Speed Kills” is out of touch with reality. It should read “Stupidity Kills”.

But back to the Mazda2.  The engine boasts excellent fuel consumption. Moneywise, the trip cost me R1 568 (143 litres) in fuel: that means I was using little more than 4.5 litres/100km at an average speed of between 120km/h and 130km/h and now again the needle touched the 160km/h mark. Not often, mind. The 6-Speed SkyActiv auto couples directly with the engine over a far wider range than any other automatics, which helps with fuel economy. The shifts are quick and there is no hunting whatsoever.

The Mazda2 is packed with features, including push button starting. Inside, the styling is clean and neat.  The cabin  has everything you could wish for. There is a soft-touch facia, and it is not overburdened with too many switches and dials. The seven inch touch screen can also be operated by using the intuitive switch next to the handbrake. You can download specific apps as well as internet radio, Twitter and Facebook. SatNav is optional and to make it operational you can buy an SD card from Mazda dealers for about R4 000. All the driving information you need is available at your fingertips – from the range you can travel to average speed and how much fuel you’re using.  The heads-up cockpit concept helps you to process large amounts of data without compromising your safety. However, the information, including on the speedometer and other gauges, is hard to read in daylight. The slide of the driver’s seat has increased to 250mm and the steering wheel can be adjusted for tilt and reach, making it easy to find a comfortable driving position.  The seats are firm, and my bum didn’t get numb on the long trip. The seats give proper support to your body although my passenger complained that her seat was too hard and that the seat belt was cutting into her.  Head and legroom at the rear is adequate while the boot, 280 litres,  will take two small suitcases, or one big suitcase and other odds and ends. It’s small so you have to think laterally before you pack. The fuel tank has a capacity of  44 litres.

But as always the question is: how does it drive? In a word brilliantly: the Mazda2 sticks to the road like Velcro. It’s nimble and is equally at home in the city or on the open road. On the motorway into Johannesburg it easily kept up with fast moving and never-ending flow of traffic.  The steering is responsive with a lot of feedback and going through the  passes, particularly the Kredouw Pass along the Prince Albert Valley was no obstacle. It was originally named the Kareedouwberg Pass and is now quite a well maintained tar road. And driving down into Prince Albert where we spent the night at the Miller’s House, on the outskirts of the hamlet, you can still see the scars from the old pass on the mountainside as well as some of the original stone retaining walls. The next day after exploring the village for a few hours, which was buzzing even that early in the morning,  we left for home travelling through the scenic and spotlessly clean Meiringspoort, and again the Mazda2 held the road well, especially round the curves.  Heading for Cape Town we hit the Op de Tradouw Pass on the R62 between Montagu and Barrydale where there were a lot of road works, with plenty of stop and go driving, but again the Mazda2 showed its mettle. Build quality on the test car was excellent: there wasn’t a squeak or rattle to be heard, even over some of the bumpier roads and going into Ashton where there was more construction going on, and stop-start driving.

The Mazda2 has dual airbags in front; and the alphabet soup of safety features: Anti-Lock Braking System (ABS), Electronic Brake-force Distribution (EBD) and Emergency Brake Assist (EBA) are standard, to name some.  It has also achieved a five-star NCap Euro safety rating.

A few words about the Miller’s House. The 1870’s Karoo cottage is situated on the farm within the village and it has been beautifully restored. The historic Albert’s mill, which is apparently a national monument is on the property.

After the long drive from Joburg, sitting on the stoep overlooking the peaceful dam (where you can fish for carp, but throw them back), with its rowboat was a welcome respite. You can watch the mountain tortoises grazing on the lawn or if you’re lucky, Bokkie, the tame springbok, may wander up to feed. We were booked in for two nights but due to circumstances beyond our control we could only stay one night. Owner Elise Senekal was most understanding. We have been to Prince Albert a few times, on day trips and for longer stays, and when we go again we’ll take the Miller’s House for sure.

Summing up: the Mazda CX-2 lacks for nothing, except  more boot space and perhaps the engineers can do something about the hard-to-read dials. For some unknown reason the Mazda brand has always been under-rated in this country. But since its divorce from Ford it has come into its own. The Mazda2 has style, excellent driving dynamics, high specifications and although it is a practical vehicle in all respects, if you are looking for family-sized transport I would look at other cars in the line-up.  However, if I was in the market for a “supermini” as some petrolheads have dubbed it,  the Mazda2 would be my  choice. It delivers on all fronts and it’s  fun to drive.  It has a price tag of R260 000 which includes a 3-year unlimited kilometre factory warranty, 3-year roadside assistance, a 3-year service plan and a 5-year corrosion warranty.