Branden Grace isn’t convinced that a majority of golf fans could pick his face out of a lineup. 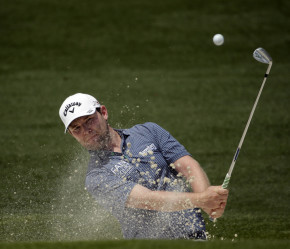 That’s saying something for one of the top golfers in the world, but that’s perfectly fine with the 27-year-old from South Africa.

“A lot has been happening but I’m still under the radar, which is nice,” Grace said. “It takes a lot of the pressure off and things like that. You just let the golf do the talking and it has done the talking so far. So I feel like I can carry on in the same direction.”

Another season like 2015 in the majors and Grace won’t remain anonymous for long. He tied for fourth in the U.S. Open at Chambers Bay and finished solo third behind superstars Jason Day and Jordan Spieth in the PGA Championship at Whistling Straits.

His own expectations have increased starting with the Masters.

“Obviously last year, two good performances and good finishes gives you a different look on the majors,” he said of his first pair of top-10s in 15 appearances on the big stages. “Now you’ve had that little piece of it. You know what it feels like. You know what it takes to win a major. Obviously now I’m hungry to win one. I going to try everything I can to make that happen. I look forward to the challenge.”

The Masters was one of only two cuts Grace missed in 27 worldwide starts in what proved to be a remarkable 2015 season. After winning in his last start in December 2014, Grace backed it up with victories in the first two months of 2015 in Qatar and South Africa.

That was just a hint of what was to come.

At Chambers Bay he was one of four co-leaders after 54 holes. Playing with Spieth in the final round, the pair was tied for the lead through 69 holes – two shots clear of everyone else with three to play. To many observers, he looked like the man to beat.

But on the short par-4 16th hole, Grace hit “one bad shot” trying to drive the green and it sailed out of bounds in the rocks beside the train tracks hugging Puget Sound. He finished two shots behind Spieth.

“I think I lost the tournament at the U.S. Open,” Grace said. “That’s the way I feel. I think I had one bad shot on 16 which cost me. That’s not to say Jordan would have doubled 17 if I didn’t, but I feel that I lost it. But it feels good. It was a good stepping stone.”

Two months later, after a tie for 20th in the British Open, Grace was again in the thick of it on Sunday at the PGA on another links-style course. Like Spieth, he could never catch Day en route to a major-record low score of 20-under and had to settle for third at 15-under par.

“If it was any other major I probably would have won it with that score,” Grace said. “That week, Jason was just in a different mode. Everything we did he did it just a couple of steps better. I know what it feels like now, I know what it takes and I know you can’t force these things at majors. You just have to let it happen.”

Those performances have proven to Grace that he belongs in the conversation when discussing favorites at majors.

“Mostly that I know now that I don’t have to stand back for any of these guys,” he said. “At the end of the day, I can beat any of them out here. You have to do it first before you can believe it and I’ve done it a couple of times. Now it’s just about doing it in a big one.”

Whether that big one might be the Masters remains to be seen. Grace tied for 18th in his Augusta National debut in 2013 despite shooting 78 in his opening round. But he missed the cut at Augusta the last two years.

“I was just trying too hard and over-preparing for it,” he said of his consecutive poor Masters starts. “That first one I prepared like a normal event and just took it as it comes. The last two years I’ve over-prepared, went up there early and played too many times. And then you get greedy and almost get too comfortable around the place. I think that was the situation that I felt. This year I’ll still go up the weekend before but take it easy and do a little bit of practice. I’m not going to overplay it. I’ll try to do the same what I did to the other majors.”

Like his good mates Louis Oosthuizen (2010 British Open champ) and Charl Schwartzel (2011 Masters champ), Grace has climbed as high as the top 10 in the world. Ooshuizen made it to No. 4 and Schwartzel No. 6, so Grace hopes to build on his ranking at No. 10 shortly after his repeat victory in Qatar to start 2016.

“That was an all-time goal,” he said of reaching the top 10. “When you turn pro you start setting your goals and locking them down. Everybody’s dream is to be No. 1 in the world, but obviously there’s a couple of steps that you have to tick down before you can get to that No. 1. Mine was to get to top 10. And now that I’ve done that, it’s easy to say No. 1. But you have to go step by step down and try to get to the top five and like that.”