A Knysna elephant has been spotted by a SANParks ranger and also Cape Pine/MTO field workers.

A SANParks ranger, Siviwe Nondobo was out collecting dung boli measurements for our scientists working on terrestrial mammals including the Knysna elephant, Lizette Moolman van der Vyver. On his way there, he first saw a caracal and then later Oupoot herself!

Yesterday, field workers from MTO saw the elephant and took pictures of her.

SANParks confirms the presence of one elephant in the Knysna forest does not mean the others are not there. It is suspected there are between 1 and 5 elephants. The location of their whereabouts cannot be disclosed. 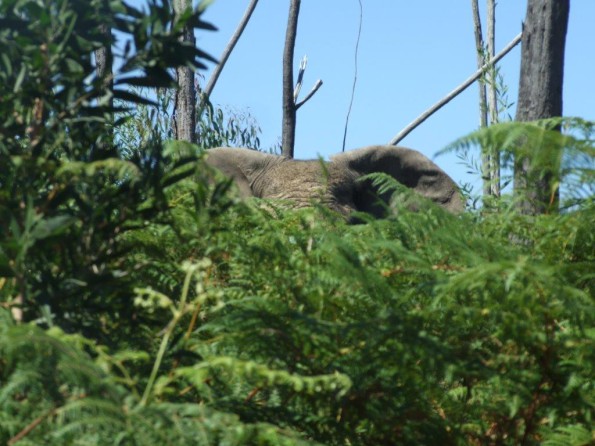 SANParks’ monitoring techniques used currently, are non-intrusive to the elephants and involve gathering data on elephant signs, for example dung circumference measurements, notes on feeding signs and dung sample taking for elephant hormone studies.  The hormone studies are aimed at determining the reproductive potential of individuals in the group as well as assessing the level of stress hormones released when the elephants move through certain areas.

The estimated 1000 elephants that historically roamed the Outeniqua-Tsitsikamma area, most certainly played an ecological role.  Data on, and therefore an understanding of, the ecological role of elephants and their potential impact on biodiversity in the Southern Cape is sparse, and the few scientific studies that were conducted, took place after the elephants were confined to the forest habitat.  It is believed that the historical Southern Cape elephant population’s range was confined to the forest parts around Knysna as a result of human settlement and agricultural development.   The Knysna elephants may therefore have been cut-off from other habitat types that they historically visited, over a century ago.  The absence of elephants in these habitats today, may carry negative consequences for the elephants’ forage needs and for biodiversity.

A popular belief that the Knysna elephants are genetically unique, was challenged by recent studies showing that these elephants once belonged to a larger, continuous southern African population, of the same sub-species as the African elephant, Loxodonta africana.  These elephants’ genetic uniqueness, or rather lack thereof, has been used by some as a measurement of their conservation value.  Basing elephants’ conservation value on their genetic status alone, however, ignores their potential role as an ecological role player.  Elephants are a ‘keystone species’, essential for the integrity of the ecosystem.  Elephants affect ecological processes through their feeding, digging and movement, and contribute to biodiversity by dispersing seeds, opening thickets, making browse more available to smaller herbivores, making water accessible in dry river beds, and promoting nutrient re-cycling.

The link shared on the Garden Route National Park’s facebook site was liked by more than 80 people within minutes!

*Oupoot is the name of an elephant in Dalene Matthee’s book (Circles in the forest):  http://www.dalenematthee.co.za/english/books/circles.html