South African romantic adventure film, Vir Altyd, has surpassed the coveted number one spot in earnings at the local box office for Afrikaans films – and has shown that audiences love feel-good movies with a heartfelt message. 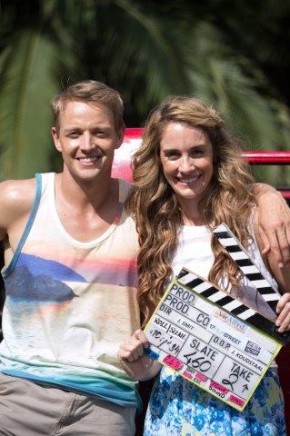 After only four weeks on circuit, Vir Altyd has earned R13.4 million, exceeding its predecessors. Vir Altyd, produced by the same team as the highly successful Pad na jou Hart, shattered records this past week, leaving the filmmakers grateful and humbled.

Ster-Kinekor Entertainment, the distributor of Vir Altyd, has released the following statement: “We confirm that Vir Altyd now has the highest box-office income for an Afrikaans movie. It has surpassed the box-office earnings of Liefling and Pad na jou Hart and stands on R13.4 million. We are overjoyed with the success. We congratulate the producers and everyone involved on this achievement. The film is still showing countrywide.” – Pieter Geldenhuys.

After the movie’s success, Ivan Botha and Donnalee Roberts, writers, co-producers and leading actors of the film, say: “It’s such a great honour and privilege for us to reach this milestone. We’re indescribably grateful to each and every person who has watched Vir Altyd, the feedback has been overwhelming and we appreciate it endlessly! We really hope that the support for Vir Altyd will build momentum for all the upcoming local films that will release this year in order for our South African film industry to go from strength to strength!”

Danie Bester, co-producer of Vir Altyd commented on this as well: “Records are there to be broken. For me, it honours an achievement of one’s predecessors or contemporaries, and secondly, it serves as encouragement for you and the team with whom you work to deliver your best. What an inspiration to have followed Liefling for so long as a beacon, what an exciting privilege to have set a new milestone.”

Vir Altyd tells the story of Hugo (Ivan Botha) and Nina (Donnalee Roberts) who grow up as best friends, despite her family’s misgivings, but lose contact when a tragic incident changes their lives forever.

After ten years, Hugo and Nina see each other again as she is about to marry Retief (Stiaan Smith). However, when her fairy tale comes to a sudden end, she and Hugo go to Mauritius as ‘bride’ and ‘bridegroom’, confronted with painful memories and strong emotions.

On the island they realise, after embarking on several adventures and meeting other couples, that it’s not about the happy ending, but about the journey on the way there.

Vir Altyd was produced by 17FilmStreetMedia and The Film Factory and is distributed by Ster-Kinekor Entertainment.