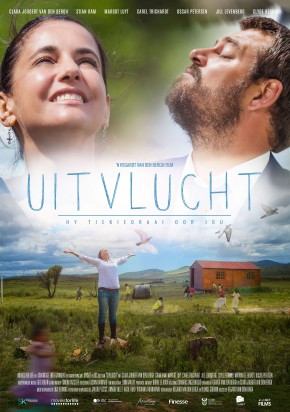 Uitvlucht tells the story of Anna (Clara Joubert van den Bergh), a conservative middle-class woman who plays with fire and loses everything in life that matters to her. During her journey of self-discovery and forgiveness, she finds work at a farm school with the name ‘Uitvlucht’ (which means refuge).

Eventually she starts healing and decides to face life again, and in the process she meets a gentle, single farmer, Dok (Stian Bam) who befriends her and allows her believe in herself again.

She also discovers her reason for living as she becomes more involved with the children’s happiness and sadness and becomes a heroine in their lives, with their struggles such as molestation, their parents’ and other family members’ alcohol abuse, the community who wants to take the law into their own hands and people who have no empathy with others’ pain.

Anna finds the refuge she yearns for and in turn, brings refuge to the marginalised little school, desperately fighting for its existence and also to the community members who are victims of poverty and exploitation in terrible living conditions.

The farm school Uitvlucht exists in real life and is situated at the foothills of the Suurberge mountain range in the Langkloof in the Eastern Cape. As is the case with many farm schools, there are almost no resources available and the communities face difficult challenges, like alcohol abuse, child abuse, illiteracy and family violence.

The local community was invaluable during and especially the school children proved that they are not inferior to professional actors.

Regardt says: “To highlight the authenticity even more, we filmed at the actual Uitvlucht school and with the children who attend school there. These learners surprised us all with their natural talent and boldness in front of the cameras.

“There are 48 children who were all part of the filmmaking process. They had an infectious and inspiring liveliness and spontaneity. It was a pleasure to shoot their spontaneity and interactions in a real class situation.”

According to the producers, “the story talks about the awe-inspiring greatness of God’s mercy in the life of an average sinner, and also about the brown communities’ struggle to maintain a sustainable life.

“It’s a story of hope in a hopeless situation, mercy during desperation, and of a love that conquers all…”

“I’m very excited about Uitvlucht, this film has a warm heart. The children are Hollywood stars! Or one could simply say, they’re all film stars,” Regardt concludes.