Two of Cape Town’s greats, Executive Chef Henrico Grobbelaar and the Southern Sun The Cullinan hotel have joined forces to bring unrivalled experiences to any guest. 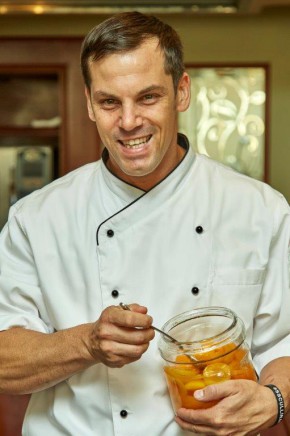 Henrico Grobbelaar is one of South Africa’s most creative and celebrated young chefs with a long list of accolades and an enviable resume, which includes: Sunday Times Chef of the Year 2009; San Pellegrino International Young Chef of the World 2009; Executive Chef to the World Economic Forum in Switzerland 2010; 2010 FIFA World Cup; Captain of the South African Culinary Olympic Team in 2008 – 2012 and part of the national culinary team since 2005.

”To be a chef, you must have a tenacious personality because the industry is a demanding one that requires a high level of commitment and effort if you want to succeed. It is a creative craft and you must be able to take criticism. The hours are long and the environment is hot, fast and noisy, but the rewards are high”, advises Henrico.

Henrico didn’t always want to be a chef, he wanted to be an engineer. Although the crisp, white chef’s jacket always held some type of mystery and fascination, he qualified as a polymer engineer in 2001. Swimming against the tide, Henrico made the seemingly radical decision to exchange a career in engineering to that of chef, and hasn’t looked back since.

Instead of enrolling at a Chef’s Academy, he peeled vegetables for 3 years under Australian Chef Michael Bridgeman, as an Apprentice Chef. He then joined Garth Stroebel and Paul Hartmann at what was then their brand new South African Culinary Academy, and graduated top of the class. Under chefs Stroebel and Hartmann, the world of cuisine revealed itself to be every bit as rich and exacting as he had anticipated. “I am grateful that I was taught by respected industry chefs Garth Stroebel and Paul Hartmann, who stood at the work counter with me. Their commitment to my success continues to this day. The repetition and drills of the basics have given me an excellent platform from which to build my repertoire and career”, says Henrico.

His rise to ‘fame’ hasn’t been meteoric. It has been steady and consistent. After more than a decade in the industry, Henrico joined Tsogo Sun’s Southern Sun The Cullinan hotel in February this year as the Executive Chef. Situated at the entrance to the exciting V&A Waterfront and within easy walking distance of the Central Business District and Cape Town Convention Centre, this luxurious, iconic hotel is no stranger to awards and accolades, which makes this partnership a perfect fit.

The Southern Sun The Cullinan hotel is elegant and stylish, ideal for both business and leisure travellers and complements the rich, cultural heritage of Cape Town with a timeless architectural tradition. It offers a full range of services, including the elegant and stylish Peach Tree restaurant which offers guests a full daily breakfast buffet and an interactive dinner buffet that serves tantalising Cape Malay fusion dishes along with fresh meals served from chef stations.

Henrico is looking forward to complementing the current offering at the hotel with fresh new ideas, starting with the launch of a brand new breakfast concept on the 1st April 2016.  Favouring classic dishes, vibrant super salads and fruits and vegetables, it is clear that Henrico’s expertise and culinary flair will soon be evident at the hotel.