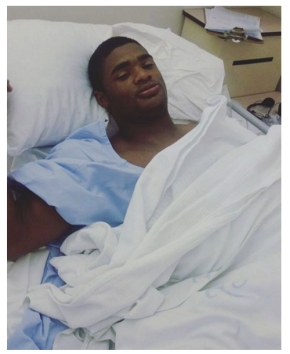 The 20-year old fractured his jaw in the Bulls’ narrow win over Japan’s Sun Wolves in their Vodacom Super Rugby match last weekend.

Initial reports are that Gelant will be out of action for six weeks. However, he should be ready to start training again 4 weeks from Thursday, when he had his surgery.

The fleet-footed Gelant was believed to be in contention for a Hong Kong Sevens berth for the BlitzBokke before he was injured. Springbok Sevens coach Neil Powell was keen to give Gelant (4 BlitzBokke caps) a run on the Asia tour (Hong Kong and Singapore) especially as he has not played for the Springbok Sevens side on the World Series this season.

Powell told Rapport newspaper on Sunday: “It’s a big set-back as Warrick was one of the players I thought had a real chance to play in the Rio Olympics. We continue to hope to have him around for the final 2 tournaments of the Series in Paris and London.”

“Haha can’t even keep my eyes open but gotta love that feeling can sleep for days…4 days now after my jaw operation… and still a lot of pain…soup and custard are so refreshing ?? I’m hungry”