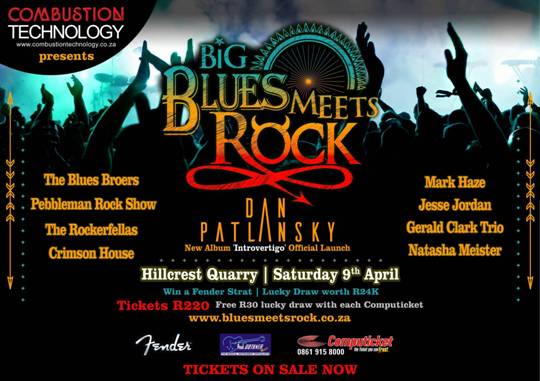 If you’re a Rocker and/or a Blues lover, get your groove on for electrifying Blues & Rock will join forces again at HILLCREST QUARRY in Durbanville on Saturday the 9th of April.

Featuring 9 Bands in a huge Marquee on a big stage with 30000 watts of sonic power, this year`s event is set to be a magnificent blast at one of the most incredible live music venues in SA. One of the highlights of the show will be the official (Cape Town) launch of Dan Patlansky‘s brand new album ‘Introvertigo’. Patlansky has just completed a hugely successful 2 month European Tour with the incredible Joe Satriani and he has gained huge recognition overseas including being voted as one of the Top Ten best Rock guitarists in the world today by Total Guitar Magazine. (UK)

Here’s a quick message from Dan to his Cape Town Fans:

Dan Patlansky gives us some Insight into the new Album ‘Introvertigo’:

Another great addition to this year`s line up is Crimson House. Grassroots, soul lifting, foot-stomping, heartmoving audio candy, built on a brotherhood that will outlive the timelessness of music they create. The music will take you back a century and right into the modern age within the same bar-line. Rooted in blues, coated in gypsy undertones, blended with early Jazz fuelled by roaring guitars, blazing Brass, sensational saxophones, shredding Banjos, & soul sweeping Harmonica’s, lead by a gravel paved voice coming out of a hard worked soul.

Needing no introduction, the line up also includes the Gerald Clark Trio, The Blues Broers and Mark Hazeamong others. Don’t miss out on one of the best live concerts of the year!

On choosing artists for the festival, organiser Richard Pryor says: “A festival is much like a recipe that promises a wonderful meal. So when putting a Festival like this together I will always add fresh Veggies to the ‘Meat and Potatoes’ then season copiously with salt and spices and cook slowly until the final meal is the sum of all those good ingredients. This Blues Rock potjie is interesting, tasty, with deep flavours that last longer and it’s a meal that will nourish the body and soul. Come get yourself more than a plateful on the 9th of April.”

We asked Simon Orange from the Blues Broers, Kyle Gray from The Rockerfellas and Riaan Smit from Crimson House to describe Rock and Blues in three words.  Here is what they had to say:

Food Stalls, Family Entertainment and Blues Rocking Goodness will be yours for 10 hours straight. Doors open at 12h15. We also have a monstrous Lucky Draw worth nearly R24000: A Fender Stratocaster, a Huge Cash Prize and a Paul Bothner Music Voucher will be going home to a lucky ticket holder. You’ll be able to buy a lucky draw ticket at the Festival for R30 but you’ll also get a Free Lucky Draw entry worth R30 with all Computicket bookings. You can collect your lucky draw ticket at the gate on presentation of your Computicket.

For info Phone Hillcrest Quarry on 021 976 4959 or visit www.bluesmeetsrock.co.za

For more info Phone Hillcrest Quarry on 021 976 4959 or visit www.bluesmeetsrock.co.za