An elegant, luscious wine and a perfect partner for the highly-acclaimed Shiraz, in this new-look flagship range. 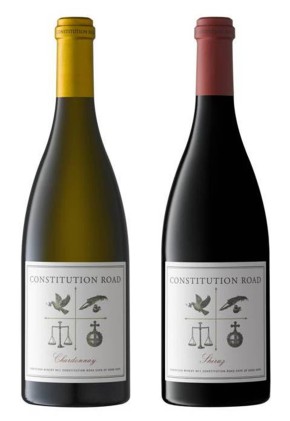 Joining the Shiraz in this range, the Robertson Winery Constitution Road Chardonnay is “deliciously rounded and deeply satisfying”, according to Jacques Roux, specialty winemaker at Robertson Winery. “This Chardonnay has got everything! It has so many dimensions and layers from apricot, peach and pineapple to some nuttiness, a hint of vanilla from the wood and a whiff of coffee. From a slice of cheesecake to a braai chop, you can pair this wine with anything.”

To celebrate the release of the Chardonnay, the Constitution Road wines are adorned with a creative new Anthony Lane label design; symbolising the democratic pillars of the South African Constitution which inspired the launch of this flagship range, and mirroring the values and beliefs of Robertson Winery.

The vineyard: The grapes come from selected premium vineyards on Robertson Winery’s Wandsbeck farm. The vineyards are shy bearing and the berries are extremely small. “It’s an amazing vineyard. I have worked with many different vineyards in the Robertson Wine Valley over the past five years and this is the best for Chardonnay”, continues Jacques Roux.

The cellar: Only the free-run juice was used, partially settled for 12 hours and then racked off the heavy lees into 100% new 300-litre French oak barrels. Natural fermentation took place in barrel, after which the wine was left on the primary lees, underwent 100% malolactic fermentation and 16 months barrel maturation.

The wine: Alluring interlaced aromas of citrus, buttered toast, marmalade and vanilla are prominent on the nose. A zesty acidity counters the rich creamy texture on the palate, which exhibits layers of citrus, pear and butterscotch that linger on the finish. “Pair this wine with a joyous gathering of family and friends as you celebrate abundance”, concludes Jacques.

The vineyard: The grapes are sourced from Robertson Winery’s top shiraz vineyards – two premium blocks on the Wolfkloof farm.

The cellar: A 10% saignée and two days of cold maceration took place in small open top fermenters. Once fermentation began, the skin cap was punched down or pumped over every six hours to ensure optimal extraction of flavour, tannin and colour. After fermentation the wine was left on the skins for 5-7 days extended maceration. Malolactic fermentation took place in 100% new 225- and 300-litre oak barrels (94% French and 6% Hungarian), followed by 36 months barrel maturation.

The wine: It has a radiant deep purple colour. Rich aromas of ripe plum and blackberries envelop warm spice notes and a hint of dark chocolate. The ripe, dark fruit found on the nose follows through onto the voluptuous, velvety palate and lingers on the finish. This opulent wine is bold, well structured and exquisitely poised.

The accolades: Awards for the Constitution Road Shiraz include exceptional performances at the Michelangelo International Wine Awards, the Shiraz SA Wine Challenge and Syrah du Monde; regular 4½ and 4 star Platter’s ratings as well as a Decanter World Wine Awards Trophy.

ROBERTSON WINERY, 160km from Cape Town, is situated in the beautiful Robertson Wine Valley. The tasting room is open seven days a week.