The group, Touch of Class, with Deon van der Merwe and Ronell Erasmus, was formed in 1985 and featured originally as the backing band for Anneli van Rooyen, Manuel Escorcio and Andre Schwartz. 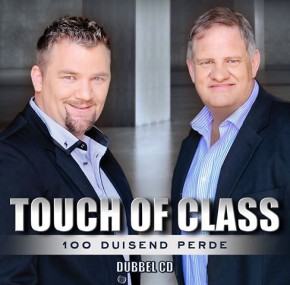 Their album, “Ek en my Meisie”, was released in 1992 and shot up to gold status with more than 25 000 copies sold before reaching platinum status two years later!  This was followed by a number of albums which reached gold status, with “Bamboesbos” and “Moenie worrie nie” being among them.  Ronell’s gospel albums also did exceptionally well with two of them reaching double platinum status! (80 000 units)

After 23 years Ronell decided to focus on her gospel career and in this time the group was joined by the dynamic singer, Ruhan du Toit.  Up to date Ruhan has been involved in 11 albums with Touch of Class with a variety of genres, from Demis Roussos, Joe Dolan and Gé Korsten covers on “Salute The Legends” to “Koffiefontein”, “Groep 2”, “Stukkie van der Merwe 1 & 2” and more!

Now during April 2016 they are releasing their new double album, titled 100 Duisend Perde!

The first single from the album, Ek Steek My Hand Op, will also be submitted to radio stations in this period.

Listen to a teaser of the song here

The song 100 Duisend Perde is a patriotic song written by Michael de Lange and is sure to touch every South African’s heart!  Ek Steek My Hand Op, written by Arri Opperman, talks to the soul while songs like Roep Die Waardheid , written by Pierre Rossouw and R.S.A., touches the subject of loving thy neighbour and more.

CD1 is filled with deep and meaningful music and Ruhan sings them from the heart! In between there are also lighter songs and a few dance numbers which will satisfy all Touch of Class fans.

CD2 consists of a variety of cover songs for which their fans have come to know and love them!  Some of these areBeautiful Noise, Sweet Caroline, Heart and many more, all done with the distinct sound and quality for which this group is known.

The message of this album:  “We are proud of our heritage, language, philosophy of life and norms!”