On the 6th April 2016 McDonald’s South Africa launched a new McDonald’s U/14 Schools League format for 2016 and the renewal of three year sponsorship with South African Schools Football Association (SASFA) at the Nike Training Centre in Soweto. 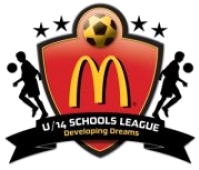 The successful event was attended by the Gauteng MEC of Education Honourable Panyaza Lesufi who showed his support for the Soccer Festivals, which were previously known as the Provincial Finals.

“We are happy with this new tournament, more schools have registered and we are hoping the number increases further as we continue to develop dreams of young south Africans, said SASFA President Mr Mandla ‘Shoes’ Mazibuko.

Registrations are still open to all the schools that want to participate in the 2016 league. Deadline is the30thApril 2016

The new soccer festivals format will take place in the following provinces:

For more information about the league and registrations visit www.sasschoolsfa.co.za  or contact the Provincial Co-ordinators: