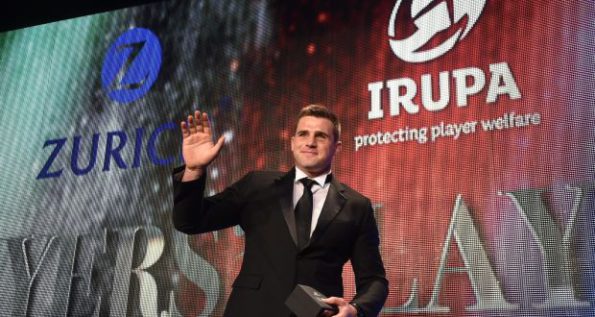 Stander thus became the first ever player to scoop the double at the 14th annual awards dinner in the DoubleTree by Hilton Hotel last night. His awards come amid the burden of captaining his adopted province this season. With that in mind, Stander said: “This is a big surprise. I’m delighted to get the award on a personal level. I wish I had achieved something with the team this year, but there’s always next year.”

The other caveat is that his personal awards will be tarnished if Munster don’t nail down a top six place this Saturday when hosting the Scarlets at Thomond Park and thus extend their unbroken 21-year presence in the European Champions Cup next season.

“It’s tough because I’m proud of what I’ve done but captaining Munster you feel a lot of responsibility and if we don’t capture qualification this weekend it’s going to feel like a disappointing year,” he said.

Even so, coming after his first Six Nations campaign as an ever-present, which he bookended with a Man of the Match performance on his debut against Wales and tries in the home wins over Italy and Scotland, it has been quite a season for Stander.

“Yeah, I would have taken that at the start of the season. When I got called up into the squad for the Six Nations I thought I’d be in the group and maybe on the bench or whatever,” he said.

“When Joe called me in for the first game, it was one of the best weeks of my life. Getting to start the next four games was great on a personal level because I worked hard and I had goals and wanted to achieve them. But now I have to get better. There are still a lot more goals I want to achieve in my career.”

Josh van der Flier was unsurprisingly named the Nevin Spence Young Player of 2016 after impressing all season for Leinster and making his debut for Ireland against England in the Six Nations.

The latest inductee into the BNY Mellon Hall of Fame was Munster and Ireland Ronan O’Gara. Leinster’s Isaac Boss was awarded the Vodafone Medal for Excellence, which rewards on-field effort combined with off-field commitment to the game.

The Zurich Contribution to Irish Society was presented to former Leinster player Niall Breslin in recognition of the impact he’s made in raising awareness of mental health and various other charities.

Members of the public voted for Connacht’s first win in 29 years in Limerickas the Powerscourt Hotel Resort & Spa Rugby Moment of the Year via Twitter.

“Winning an Irupa award is the highest honour a player can receive. All the winners and nominees have the total respect of those who they play with and against and I am delighted for CJ,” said Irupa chief executive Omar Hassanein.