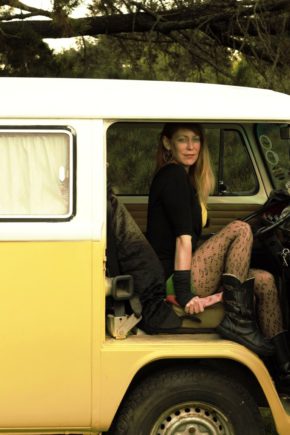 With the release of her new album, Castles & Towers, two of Heather’s songs have been topping the South African charts since their release in January and her latest single ‘Pick Daisies’, has not only spent the last 10 weeks in the Number 1 spot on Cape Town radio, but is also play-listed on many radio stations, both here and abroad.

Touring in her 1975 VW Kombi, Heather Waters has extensively performed throughout South Africa, Africa parts of Europe and the U.K. too. Her reputation as one of the top acoustic folk-rock artists precedes her.  Her music has been described as “Ethereally captivating” (Peter Romp, The Cape Times) and “bold and unflinching” (Nick Frost, blogger).

Now with the success of  Pick Daisies,  VOLKSWAGEN  is mobilizing this fun and incredible Artist for her 2016 national tour, celebrating Heather Waters Music, using the iconic VW Volkswagen Kombi as a tribute to the lifestyle that the new single ‘Pick Daisies’ represents!

During the last decade, this prolific artist has won numerous awards, both locally and internationally and has worked with some of the country’s greatest engineers and producers, including multi-SAMA award-winning producer Peter Pearlson.

Described as one of the best things to happen to the South African music scene, this is one artist you cannot afford to miss!

Make sure you catch Heather Waters live at a venue near you.  Go to (http://www.heatherwatersmusic.com) for performance dates and venues.