The Junior Springboks on Tuesday night defeated a determined Maties outfit 41 – 14 in a physical encounter at the Danie Craven Stadium in Stellenbosch. 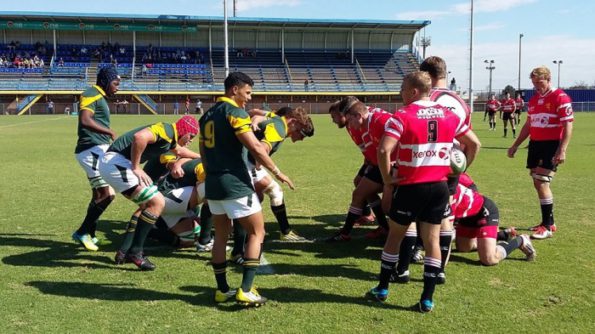 The match marked their second warm-up game in the lead-up to the World Rugby Under-20 Championship in Manchester, England, from 7 to 25 June.

The team registered a 60 – 19 victory against a Xerox Golden Lions Under-20 Invitational side in Johannesburg last Friday in their first warm-up match.

While the result left Junior Springbok coach Dawie Theron satisfied, he admitted that a series of knock-ons and forced passes at crucial times was disappointing. The coach, however, was pleased with the team’s set pieces and their ability to string together phases on attack once they had found their rhythm.

He was also encouraged by their fitness levels, which saw them score three tries in the last 10 minutes.

The Junior Boks were made to work hard for their points in the first half, and opened up the scoring with a drop goal by flyhalf Curwin Bosch.

Wing S’busiso Nkosi scored the first try in the 11th minute compliments of a smart pass by fullback Manie Libbok, which Bosch converted for a 10 – 0 lead.

Maties, however, hit back with a try from a charge-down in the 23rd minute to reduce the deficit to 10 – 7.

Centre JT Jackson, however, inflated the Junior Boks’ lead to 15 – 7 six minutes before the break after rounding off a try created by his own line break. This proved to be the last points of the half.

The second half was equally tight, which resulted in Bosch kicking three penalties to stretch the team’s lead, but a try for Maties from a chip-and-chase left the score at 24 – 14 with 13 minutes to play.

The Junior Boks, however, delivered a spirited effort on attack in the dying minutes, which saw scrumhalf James Hall, No 8 Junior Pokomela and centre Franco Naude cross the tryline to secure a 41 – 14 win.

Hall’s try was the result of a powerful performance up-front, while replacement wing Edwill van der Merwe dashed up-field and passed to Pokomela at pace, which allowed him to bounce off a defender to touch down.

Naude, meanwhile, scored the team’s fifth try on the stroke of fulltime following several phases, which Bosch converted to increase his individual tally to 16 points, and seal the 41 – 14 victory for the team.

Theron was pleased with the result, but he said they had to work hard to iron out the errors before their final warm-up match against South Western Districts in Oudtshoorn on Saturday.

“The score is pleasing, but we made too many errors in the clash, which we cannot afford in the World Championship,” said Theron. “We have a lot of skill in the team, but we realised that forcing passes does not necessarily pay off.

“We had to work hard to wear them down in the first half, but when we started dominating in the set pieces, we played well. The last 30 minutes, in particular, was fantastic.

“Obviously we have to work on the passing and a few other areas before our last warm-up game, but it is a positive that we have a lot to work on, as we would like to improve as much as possible as a team.”

The team will travel to George on Thursday morning where they will prepare for the clash against SWD in Oudtshoorn.