This is the 10th instalment of the Cape Town Folk ‘n Acoustic Music Festival. 22 South African artists will perform completely acoustically in an unplugged, intimate, concert-style setting, stripped down to the essence of the songs. The evening is set to be an experience of the finest musical storytelling from the personal journeys of some of South Africa’s best songwriters and musicians. 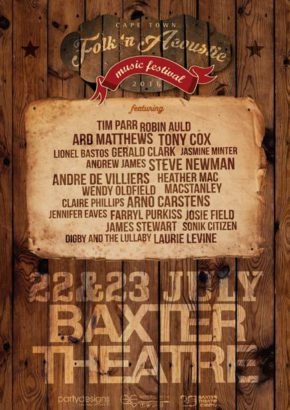 The event organiser Gavin Minter from Real Wired Music says that he is very excited about this year`s performers.  “If you remember bands like Z-Astaire, Ella Mental, The Usual, Delta Blue, Sweatband, HAMMAK, Springbok Nude Girls, Just Jinjer, Zen What, and SA’s most renowned guitar duo Steve Newman and Tony Cox, then this year`s festival is going to be a treat for you. We will feature all the singers from the mentioned bands, plus a few more exceptionally talented artists have been added to this year`s Winter instalment of the Cape Town Folk n Acoustic Music Festival.”

There is rare collaboration with two legendary multiple award-winning acoustic guitarists, Steve Newman and Tony Cox, who will be performing on both nights. Cox and Newman have toured the world and played every major festival, and between them have released over 30 albums. Tony Cox says: “An acoustic guitar has to be one of the most emotively driven instruments on the planet, a small orchestra in your lap, take it anywhere, it transfixes people…”

Wendy Oldfield played at the first Cape Town Folk n Acoustic Festival in 2011. She says that she was absolutely thrilled to be asked to play again. Oldfield adds: “It is such a well run musical event and the quality of co- performers are mind blowing. Playing acoustically is quite a different experience to full band. This is where a good song stands to the test. It is quite exposing and allows for a different vocal expression.”

Farryl Purkiss says that as an artist one never really truly masters an instrument. “There is always something more to learn. Some people like to think that they are leading the way when composing a song and the guitar is just following its master and filling in the blanks, but it`s the other way round in my opinion. I as a songwriter am merely a passenger, a stowaway on a ship that has a course and destination long decided before I got involved.”

Laurie Levine will be performing with Josie Field. The blues infused vocal-rock of Josie Field connects with the intimate folk, country styles of Laurie Levine to create a unique and intimate musical experience. Their new album “TigerLily” was released in 2015. Levine says: “It is rare to be on a line up with such a large array of local artists. There’s something beautiful in the coming together of a collective of musicians and hearing the wonderful diversity of style and talent on offer on one stage on one night.”

James Stewart (formerly from The Usual) is looking forward to be playing acoustically. He explains: “It brings the song right back into the space it was when it was written. It’s really special to reconnect with the birth of songs in this way.”

Robin Auld says playing a stripped down set has certain practical advantages:  “It’s always nice to play at an event where you know the music would survive without electricity.”

Don’t miss out on one of the musical highlights of the year! Tickets available at

We would like to thank our sub-sponsors Audio Engineering and Party design.