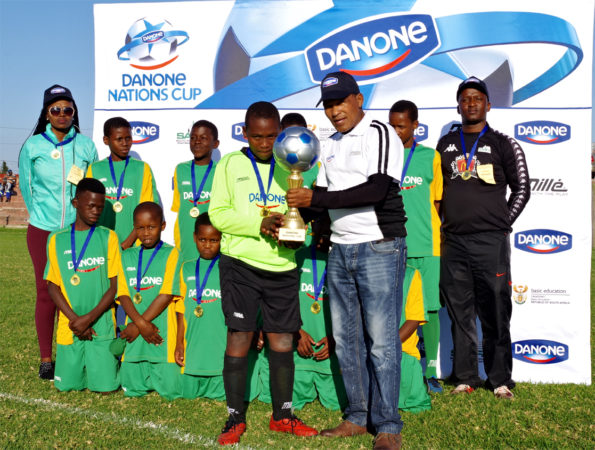 It was a day of penalty shootouts – half of the games were decided on penalties and St Helena proved to be the penalty kings, with four of their games ending in stalemates at the end of normal time.

Making it to the national finals is a great feat for St Helena Bay, who only started playing in the tournament in 2015.  They are also the first team from the West Coast to make it to the nationals in this competition.

Coach, Masibulele Ntanjana, who teaches at the school, persuaded the principal of the traditional rugby-playing school to introduce soccer in 2013.  Since then it was a case of building the teams and teaching the rules to players who had never played the game before.

The coach concedes that luck played a part in their winning the title. “The games were very challenging and many of the players had stage fright due to the pressure on them,” he said.

After losing in the regional playoffs last year, Ntanjana decided it would be beneficial for the players to play club soccer. So, he registered them at a local club, Amabantete FC, where they could get more experience in playing together, and have more intense training.

“That really helped in our preparations for the Danone Nations Cup, and although we won, we still need to rectify a lot of mistakes that were committed during the provincial tournament,” he said.

“Our defence was weak and we kept on playing the ball backwards instead of passing to the midfielders. We need to sharpen up before the national finals.”

The teams from Gauteng and KwaZulu-Natal will most likely be their toughest competition at the nationals, the coach said. “Gauteng has not played their provincial finals yet, but I know that the coaching in the province is good.”

Ntanjana will be looking to Ntalahla Mva as a key player for the national finals. “He is a good dribbler of the ball, and an accurate passer, with a good long range shot,” he said.