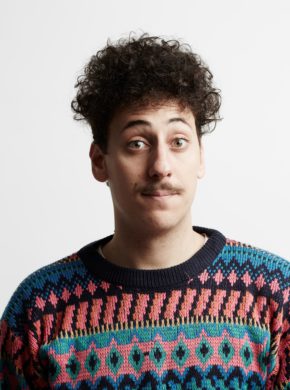 The hilarious and award-winning stand-up comedian brings his unique style to the Golden Arrow Studio Theatre at the Baxter Theatre, Cape Town from the 31st May to 4th June.

Due to popular demand, a return season has been opened at the Baxter Theatre on the 21st and 22nd of October 2016.

This talented youngster brings his wild ‘fro’ to the stage as he explores his conservative upbringing in Kempton Park (Johannesburg) with his current liberal outlook on life.

Schalk Bezuidenhout is one of South Africa’s best young comedians and has genuinely made an impact in the comedy world.  In the few short years that he has been on the comedy scene, Schalk has won two Comics Choice Awards and has opened for Trevor Noah.

His personable style and true-to-life stories make watching him a unique experience.

His family and friends stood back and watched Schalk evolve from a conservative caterpillar into a beautiful drama queen butterfly – complete with a moustache and furry afro.  While studying at the University of Cape Town, Schalk realised that there was more to life than boerewors and rugby and started doing stand-up in April 2011.

He took this his career like a fish to water and has had the opportunity to perform at great venues around the country with even greater comedians.  On stage, his fun and energetic style appeals to people of all walks of life.

Apart from his Comics Choice Awards, Schalk is the 2012 winner of the Cape Town Graça Comedy Showdown, has performed at Blacks Only in 2013, 2014 and 2015, participated in the full run of the Jive Cape Town Funny Festival in 2014, took part in Trevor Noah’s NationWILD Tour in 2014 and 2015 and opened for Noah in 2015. He also received the KKNK Kanna Award for Best Up and Coming Artist in 2015 and recorded his own Comedy Central Special in the same year.

Make a date with a talent as sweet as mother’s milk and with a skop as powerful as brandewyn, the ‘national’ drink of the town in which he began life as a genuine funny man.

Tickets for the 2nd run at the Baxter Theatre (main theatre) are now open at Computicket.