South African film Twee Grade van Moord (Two degrees of Murder) sees the onscreen reunion of two of South Africa’s most loved and respected actors, Sandra Prinsloo and Marius Weyers.  The official trailer for the film was released today and the film releases nationwide on 22 July 2016. 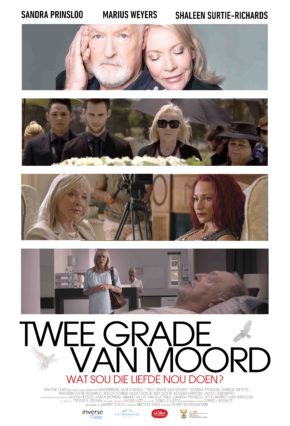 Aleksa Cloete (Sandra Prinsloo), a well-known Cape Town psychologist, has authored a bestseller, Love Doesn’t Hurt, but despite her long and happy marriage to husband Ben (Marius Weyers), she has an entirely intellectual view of love. Their only child Christiaan (Roelof Storm) was forced, while growing up, to find much needed nurturing from his ‘second mother’, loyal housekeeper Fy Abrahams (Shaleen Surtie-Richards).

When Aleksa agrees to take part in a reality-style documentary about her breakthrough therapeutic work with women who confuse pain with love, one of her patients, Tanya Basson (Hilda Cronje), agrees to be the case study. Ben suffers a debilitating heart attack and Tanya arrives at Aleksa’s home with the news that she has killed her boyfriend during a heated row. Aleksa realises that she has misjudged the severity of Tanya’s emotional state and, at the same time, Ben tells her that he has reached a life-changing decision about the destiny of his own life.

As the story unfolds, Aleksa is forced to question her integrity and confront her ability to make sacrifices for the people she cares about. Ultimately, she has to confront the question: “What would love do now?”

Prinsloo says about her role in the film:  “I had to unlock the emotions in myself.  As if I was the one that wanted to die.  It was a terrible night when I thought about it that way.  How do you say goodbye to everything?  How do help someone so close to you to die?”

They worked for a month on the emotionally draining film and it helped that Sandra and Marius knows each other so well.  “We just clicked from the first time we worked together.  It is very important, especially for such an emotional role.  You have to be able to trust the other person completely.” says Weyers.

Prinsloo’s stage and film career spans 30 years. During this time, she has performed leading roles in works by renowned international dramatists and South African playwrights, in more than 100 stage productions, eight feature films and numerous television productions. She also has a reputation as an outstanding actress in many countries overseas, including England, France, Germany and the United States. ‘De Kat’ magazine named Prinsloo as one of the 100 most influential people in South Africa, and she was also the recipient of the Academy for Art and Sciences Award for her lifelong contribution to theatre in South Africa. Most recently, she hosted her own chat show on kykNET, ‘Sandra op ‘n Drafstap’, where she interviewed prominent South Africans.

Weyers is one of South Africa’s most famous and loved leading men.  His outstanding performances on stage and screen have endeared him to audiences locally and abroad, earning him a special place in the hearts and minds of the critics and audiences alike. He has appeared in more than 35 feature films and 100 theatrical productions.  His feature film credits include Warner Bros’ ‘Blood Diamond’ (Edward Zwick), ‘Catch a Fire’ (Phillip Noyce), ‘Red Dust’, ‘Stander’, and possibly his best known South African role in Katinka Heyns’ movie ‘Paljas’. He has won numerous awards and accolades, and is a recipient of The Medal of Honour from the SA Academy of Arts and Sciences for his contribution to theatre.

Twee Graade van Moord is produced by Barry Strick of Inverse Films, and Full Faculty Films, in collaboration with Waterfront Film Studios and the Department of Trade and Industry (dti). The film is distributed in South Africa by Indigenous Film Distribution.