World Environment Day is held each year on June 5. It is one of the principal vehicles through which the United Nations (UN) stimulates worldwide awareness of the environment and enhances political attention and action. The International theme for this year was “Go Wild For Life” – the emphasis being on zero tolerance for the illegal wildlife trade. 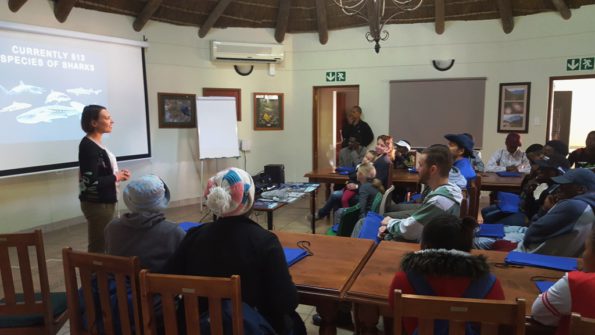 The Eden District Environmental Services Unit used World Environment Day to organise a special two-day event.  The first day’s activities were held on Friday at Herbertsdale Primary School where learners were treated to a Biodiversity theatre show by the Lunchbox theatre group where important conservation messages regarding species protection were conveyed to them. This was followed by a donation of a water tank to Herbertsdale Primary School by Eden Municipality, for their new food garden. Learners were given a rare opportunity to visit Gondwana Game Lodge to see and learn about wild animals and plant life up close. According to Vernon Gibbs-Halls, Environmental Specialist for Eden District Municipality: “Learners were taught about the booming illegal trade in wildlife products which is eroding Earth’s precious biodiversity, robbing us of our natural heritage and driving whole species to the brink of extinction. The killing and smuggling is also undermining economies and ecosystems, fuelling organised crime, and feeding corruption and insecurity across the globe.”

The following day commemorated Oceans Day 2016 and “Paddling out for Sharks”, which was celebrated with Thembalethu High School. World Oceans Day is a global day of ocean celebration and collaboration for a better future. World Oceans Day is an annual observation to honour the world’s oceans, celebrate the products the ocean provides, such as seafood, as well as marine life itself for aquariums, pets, and a time to appreciate its own intrinsic value. The ocean also provides sea-lanes for international trade. Global pollution and over-consumption of fish have resulted in drastically dwindling population of the majority of species. World Oceans Day also provides a unique opportunity to take personal and community action to conserve the ocean and its resources.

Thembalethu High School learners were further treated to a day out at Ebb and Flow to participate in various activities organised by Eden District Municipality, the Landmark Foundation, SANParks and the “Keep Fin Alive” programme of Esther Jacobs Overbeeke.

After an introduction by Mr Vernon Gibbs-Halls of the SASSI chart for wise fish choices to be bought or consumed in order to utilise our oceans sustainably, Ms Esther Jacobs Overbeeke gave a riveting presentation on shark conservation. Using her puppet called “Fin” as an ambassador of her educational programme, learners were left with a greater understanding of the importance of sharks in our oceans’ ecosystems and the threats they face through nets, ocean plastic, long line fishing, finning and trophy hunting. They were then accompanied by Ms Monica Vaccaro from Landmark Foundation on a hike through the forest, while others participated in a paddling activity with Mr Muneer Moses of SANParks entitled: – “Paddling out for Sharks”. Paddle Out for Sharks has become an annual event to raise awareness for the plight of sharks in our country.