Junior Springbok coach Dawie Theron made six changes to his starting team to face Argentina in the World Rugby Under-20 Championship at the AJ Bell Stadium in Manchester on Saturday to suit the anticipated wet conditions. 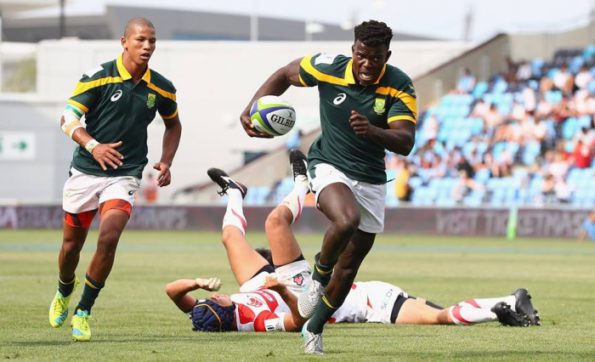 These changes include two positional switches in the backline, with Manie Libbok and Curwin Bosch swapping positions between flyhalf and fullback. The backline also shows one personnel change with Franco Naude taking over at inside centre from JT Jackson.

Hooker Jan-Henning Campher and lock Ruben de Villiers retained their places among the replacements, and will be joined by Wiese, who will provide looseforward cover, Holtzhausen and Jackson.

“We are expecting wet weather for this clash, so we decided to beef up our pack,” said Theron.
“We also brought in Curwin Bosch at flyhalf because he is the best tactical kicker in the group at this point, and in wet conditions the tactical kicking has to be good.

“Ideally we would like to play the style of rugby that we played in the second half against Japan, but the wet weather could create a challenge in that regard. However, if we produce solid set pieces, and balance that with smart tactical kicking and use our skills, hopefully the results will follow.”

Theron expected Argentina to provide a tough challenge all around and said his team had to be switched on for the full duration of the match to counter the challenge.

“Argentina are a disruptive team by nature, as we have seen over the last few years and also in their opening match against France,” said the coach. “They are particularly tenacious on the ground and they like to get in behind teams and off-load.

“They will certainly be motivated to beat us after their victory against France, so we have to be ready for the challenge.”

Junior Springbok team vs Argentina in the World Rugby U20 Championship: