Patrizio Buanne set to steal a lot of hearts with his new album, Viva La Dolce Vita, including a special bonus CD for South Africans featuring hits with local artists. 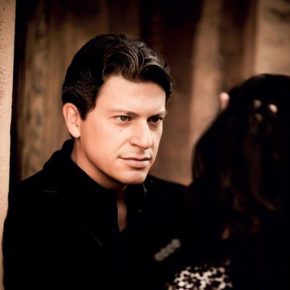 The internationally acclaimed singer, Patrizio Buanne, is coming to South Africa for the tenth time. Boasting multiple platinum record sales, he is known for his unique voice and energetic performances. It comes as no surprise that this one of a kind singer has an enormous fan base word wide and is known as Australia’s favourite Naples pop crooner.

For more than ten years now, he has been performing to sold out audiences, in Europe, Australia, South Africa, Russia and the USA. This includes performances for the elite, like, the Pope, Royal families and the former USA President, George W. Bush.

Patrizio is known for his romantic songs. But just because he’s into romance, it doesn’t mean that he is corny or boring. “I grew up in my parents restaurant in Naples, Italy, listening to classics from the fifties and sixties. I always sang along, but when I was older, I decided to sing rock ‘n roll. I was really good at rocking with the guitar and jumping around on stage, but the lyrics lacked depth. Lyrics need to say something, touch your heart,” says Patrizio.

“Romance is about much more than candle light dinners and Valentine’s Day. It’s something shared between two people every single day, whether it is to hold hands, care for each other, to respect each other or helping in the kitchen, and yes, that includes washing the dishes,” he teases.

“Romance is about following your heart without thinking about it too much. What’s in your heart needs to come out of your mouth, and that’s what I want to sing about.”

The acclaimed heart throb, known as the Italian Tom Jones, is coming to South Africa on 19 July to promote his latest CD, Viva La Dolce Vita. The album is a celebration of the ten years since he released his first international album, The Italian.

Viva La Dolce Vita is his forth international album, and like all the others, has already reached platinum status abroad.  This is remarkable, seeing that music sales are very low worldwide. Well known Italian and English favourites like ‘Surrender’, ‘Al Di La’, Il Mondo, Mambo Italiano, Un Angelo and some new songs can be heard on the CD.

The album will be released in South Africa on 24 June, but, as a double CD because Patrizio has got a special ten year celebration surprise for his local fans – a bonus CD. Hits with local singers like Liefling’ with Steve Hofmeyr, ‘Always on my mind’ with Juanita du Plessis and ‘Ek mis jou elke dag ‘n bietjie meer’ with Corlea Botha can be heard on this special CD.

He will also be performing at Classics is Groot on 29 and 30 July in Pretoria. This show is produced by Coleske Artists, the guys behind the successful Afrikaans is Groot shows, and will focus on classic hits but with a modern twist. He will perform along other favourites like Jannie Moolman and Corlea Botha.

Although he is celebrating ten years since the release of his first CD, he has been singing for 25 years. “Although I like to sing classic, I am not a traditional tenor, nor a classical singer. I enjoy singing about romance, lyrics that touch people’s hearts. The fact that I have sold more than 5 million records worldwide is a bonus, because I am simply doing what I love.”

“There is always a lot of woman at my shows and of course a lot of men as well. The men know that they will score brownie points if the go along,” says Patrizio and laughs.

According to him Viva La Dolce Vita is the perfect name for this album because it personifies his outlook on life.  “La dolce vita means ‘to live the sweet life’. And that is my life. Not that my life is perfect, there is a lot of sorrow around us, worldwide. But I prefer to have a positive outlook on life, and that is what it is all about.”

“I want to make people happy with my music; there is a lot of positive energy in the lyrics. If I make my fans happy, I am happy. For fans it will be a thrill and for people who don’t listen to my music, the perfect opportunity to get to know it,” says Patrizio.

He loves our sunshine country and its people. “It is so special to go to a country far away from your own home and then the people show you love, respect, support and like your music. What is not to like? And there are so many interesting cultures.”

He’s got a soft spot for our wines, especially a good bottle of Pinotage. “And on top of that the county is so beautiful with such great food. In Italy we always say, to eat is a necessity, but to enjoy food is an art.”

When he has a gap in his busy schedule he also enjoys going on game drives.

Although he sings so passionately about love, true love is still eluding him. But he has far from given up on it. “I travel a lot and meet a lot of interesting people. Who knows, perhaps one day I will meet the right one.”

“I am so grateful for being successful. That was never why I started singing, I purely sing because it is my passion and I truly believe that Viva La Dolce Vita is my best so far.”

“This international singing sensation is going to be around a very long time so learn the face, learn the voice, learn the name…PATRIZIO!” – Larry King

The first single from the CD  – I will love you – will be released to radio stations nationwide on 20 June 2016.

Have a look at the video here: