(Cape Town, June 2016) Stepping out into fate, Amy Tjasink is launching her debut EP ‘Average Jane’ on Monday, 8 August 2016 at 19:00 at Suikerbossie Restaurant in Hout Bay. 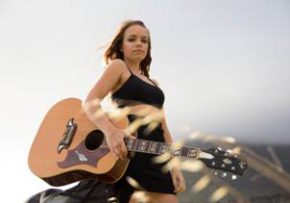 Anything but average, Cape Tonian singer-songwriter and 23 year old, Amy Tjasink encompasses a folk-country and pop style music with a unique vocal twist. Amy has taken the bold step to follow her dreams and release an eight track debut EP produced by Colin Sher. This is something she was able to put together in just a few months but it has been on her heart for years.

This is her debut to the world, simply showcasing her incredible talent and creativity and she has created an album that is so unique and personal to her it’s completely self-styled. With guitar and piano at her fingertips, her passion and zest for the music industry is what drives her to greater heights.

“2016 marked a new era for me, one that was set in motion and has rolled out in a matter of months,” explains Amy Tjasink. “It’s extremely exciting and daunting all at the same time because I’m showing the world a small part of me, doing this by myself, for myself. But I wouldn’t have it any other way. I just hope that everyone loves and enjoys my music as much as I do.”

Join Amy Tjasink and her close friends and family as she debut’s her dreams to the world. Kai Connor will open the floor with DJ Cosher performing at the after party. Tickets are sold on Webtickets at R100 per person. Canapés will be served as well as a cash bar available throughout the evening.