The much loved South African husband and wife duo, the Bottomless Coffee Band, will be performing at the Edinburgh Fringe Festival for the first time in 2016. 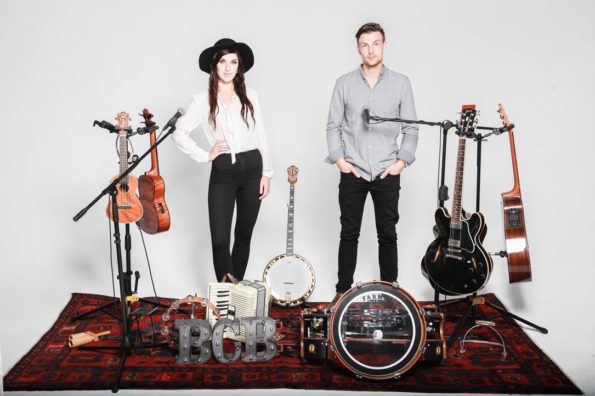 After releasing their debut album titled, “Room with a View” in November 2014, they made a musical mark in the South African industry, which led to a full-time music career for the pair. At a rather young age, both Lourens and Esté Rabé gave up their corporate careers to pursue, what they believe is their deeper calling and passion- to make music together. Ever since, they have been touring through Africa and Europe, performing and sharing their music with enthralled audiences.

Although only two band members, they produce the sound of a full band by cleverly combining, and switching, between various instruments throughout their show. With their multi-instrumentalist approach Esté and Lourens produce a truly unique sound and enticing visual performance, using instruments such as a custom-built foot drum kit, various guitars, ukeleles, harmonicas and an accordion. Currently they play 10 instruments between the two of them. This is what you’d call musical multi-tasking at its best.

Bottomless Coffee Band says that they feel privileged to have the opportunity to pave their way into the international festival scene by representing South Africa at this year`s Edinburgh Fringe Festival in Scotland. “We are going to perform our little South African hearts out!” Esté says: “The Fringe Festival started in 1947 after the 2nd world war. The Scottish wanted to lift the spirits of the community and they booked specific artists for the festival. But other artists also spontaneously arrived, as they wanted to be part of this initiative. That is still the principle of the festival today and artists show up to perform or exhibit wherever they can in cafés, on streets and in theatres. We are quite excited to be part of this legacy where artists are using their talents to bring people together. And today it is a festival where many countries take part. The international flair is something that we are really looking forward to experiencing.” Lourens adds: “We don’t really know what to expect, as people we have spoken to say that we as South Africans cannot comprehend the magnitude of the festival, as we do not have anything locally to compare it to. We are looking forward to see what all the other musicians are going to bring because it is a place where creativity is at the order of the day. From bluegrass to jazz to people using funky instruments and crazy sounds. We are looking forward to taking time to go and see as many diverse, international productions as possible. We would love to talk to artists from other countries about how their music and arts industries work back home. We will also definitely make time for some classic English comedy.”

The name, Bottomless Coffee Band, captures the vibe and atmosphere they wish to create with their music: warm, festive, inviting, and well, bottomless amounts thereof.

The couple’s chemistry is electric and reminds of the good old days when Johnny Cash and June Carter filled theatres with folk music. Their unique genre originated from Esté’s classical training and experience as classical soloist for the Stellenbosch University choir, married with Lourens’s blues, rock and garage band background. Their style can be described as folk-rock with influences of blues and opera. The band members like to refer to it as ‘gourmet music.’

Listen to “Room with a View” EP on Soundcloud:

The European and UK Tour includes shows at: