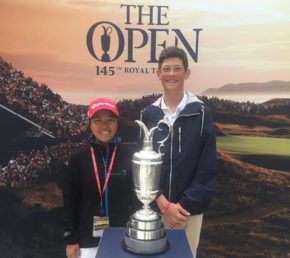 The biennial curtain-raiser for The Open Championship came under the Royal and Ancient (R&A) umbrella in 2000.

The R&A’s 152 affiliates are invited to enter their leading boy and girl golfers aged 16 and under and the South African pair joined 150 competitors from a record 80 countries in Scotland for the 2016 edition.

This year’s field were greeted on arrival by the 2015 and 2011 Open champions Zach Johnson from the United States and 2016 Ryder Cup captain Darren Clarke from Northern Ireland, who also presented the competitors with their players’ badges ahead of this week’s championship.

Founded in 1994, the Junior Open is traditionally played on a nearby course shortly before The Open and this year’s event is taking place at Kilmarnock, less than three miles from Royal Troon.

Son from Wanderers opened her campaign with a four over 77 to join eight players in joint 16th and Lamprecht from Oubaai carded an 82 that secured him a seat in the 12-man bus in 46th place at nine over.

The competitors will play two rounds of stroke play, after which the leading 80 players and ties progress to the third and final round.

Some of the world’s best golfers have featured in the Junior Open over the years, including 2014 Open champion Rory McIlroy, 2015 US Open and Masters Champion Jordan Spieth, seven-time European Ryder Cup player Sergio Garcia and 2010 US Women’s Open Champion Paula Creamer.

Written and released by Lali Stander on behalf of the South African Golf Association and Womens Golf South Africa.