The totally unique new South African film, My Father’s War, will be released nationwide on 5 August 2016. 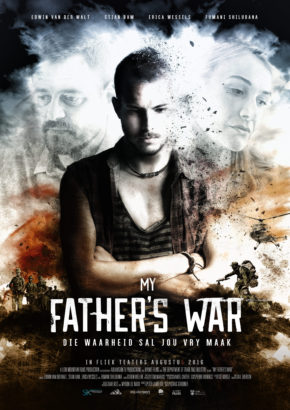 This bilingual (Afrikaans/English) drama focuses on the broken relationship between a father and his rebellious teenage son and will reach a broad audience and especially those touched by the war:  soldiers, wives, husbands, children and parents.  It will bring back memories, exorcise ghosts and help to bring more understanding and emotional healing to viewers – even those who had absolutely nothing to do with the war.  Any parent and child will be able to relate to it on a personal level.

The film combines the theme of a broken relationship with the Border War through instrumental dream sequences and overcomes the gap between a father and his son even though the war occurred almost thirty years ago.

The film is set in 2003 and 19-year-old Dap Smit (Edwin van der Walt) is constantly fighting with his father, Dawid (Stian Bam), a veteran of the Border War. The men don’t see eye to eye on anything, and there seems to be no hope for reconciliation between them. Dawid’s wife, Carina (Erica Wessels) is caught in the middle of their epic battle.

Then Dap has a series of dreams in which he is a combat soldier in the Border War in the 1980s. There he meets his father at the same age, and those dreams turn young Dap’s perception – and life – completely upside down. There’s no going back. But what is the way forward?

Edwin van der Walt says that the making of this film was a very personal experience for him and that he learnt a lot about love, relationships and the truth.  “This film forms part of a specific season in my life and to play with my mentor, Stian Bam, was and will always be one of the highlights in my career.  It was a challenging process, but really enriched all of us.  I hope and trust that this film will be a step in the right direction for people to heal personal relationships.  I hope that everyone learns more about the Border War and about the effect that it had on our Grandfathers, Brothers and Fathers”.

Other actors that can be seen in the film includes Neels Clasen, Hannes Muller, Meren Reddy, Fumani Shilubana,  Vian Singleton and David Rees.

My Father’s War releases nationwide in the following film theatres on 5 August 2016 and is produced by Lion Mountain Films and distributed by Ster-Kinekor Entertainment: