#we salute our rangers is a National campaign encouraging citizens to send messages to rangers during International Rangers Day (31st July 2016). 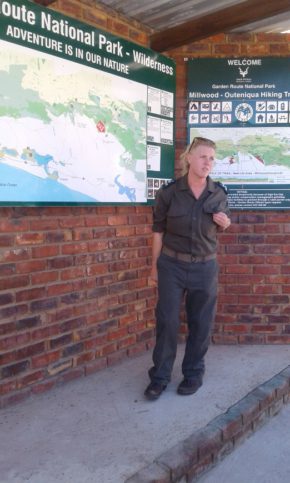 According to the International Ranger Federation ‘world ranger day is a campaign to commemorate rangers killed or injured in the line of duty.’ It is also a platform to celebrate work undertaken by rangers to protect wildlife and natural assets.

In the Garden Route, rangers will celebrate the campaign day on Friday, the 29th July ahead of official 31st of July. SANParks has invited the Game Rangers Association of Africa’s Chief Executive Officer- Andrew Campbell to speak at the event. Led by Knysna’s Area Manager, Johan de Klerk, the day’s programme will include water safety demonstrations by Honorary Rangers in Knysna-(Dereck Mentjes), collaborative work with the South African Police Service (SAPS) and off course the annual tug of war competition between the different sections of the GRNP –Wilderness, Knysna and Tsitsikamma.

Ranger duties include but are not limited to law enforcement and anti-poaching, maintenance and overseeing alien clearing, assisting with executing controlled ecological burns and fighting wildfires, regular patrols, assisting with research and ecological monitoring.

This year’s campaign can be extended to members of the public via social media. Send your messages to rangers using the twitter handle:  #we salute our rangers