In his Presidential Report during the Annual General Meeting of South Western Districts (SWD) Cricket that was held in Oudtshoorn on Saturday a report of a highly successful year for SWD Cricket was tabled. 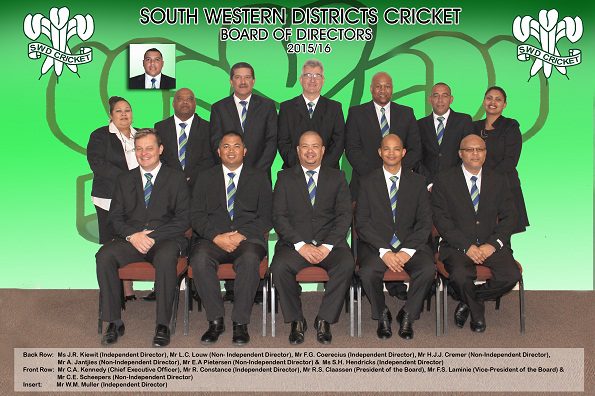 The outstanding highlight of the 2015/16 season was when SWD Cricket was rewarded for its excellent operational structures and programs. SWD finished second overall when Cricket South Africa (CSA) announced the final results of the 2015/16 Operational Model Incentive Scorecard and the related incentive payments to category winners. Also of significance was the award received as the best Sport Federation in the Western Cape by the Department of Cultural Affairs of Sport.

SWD, who finished second at 83.39% behind Northerns (83,73%)  received a significant financial incentive after achieving a minimum qualifying score of 75% on the points scale after our third overall position in the 2014/15 season. SWD also won the categories for the best provincial academy and data management adding up to a total prize money of R1 466 800.

Another significant achievement the past season was the finalization of the shareholder status within the Western Cape Cricket structure. SWD Cricket will host the first franchise match in Oudtshoorn in January 2017 when the Cobras will take on the Highveld Lions in a Sunfoil Trophy match at the Recreational Grounds.

SWD Cricket successfully presented the CSA Franchise Academies Week in September 2015 and also rendered logistical and administrative support to the presentation of the SA National Defence Force Cricket Week and South Africa Police Services Cricket week that were hosted in Oudtshoorn. The second edition of the Africa Twenty20 Cup will take place in September 2016.  Oudtshoorn will be a host venue for this event and operational plans are in progress to ensure that we present not only a high quality event but that we also gain commercial value with this event.

In a year where we were the company was confronted with tough financial challenges a surplus of R81,915 for the 2015/16 financial year was reported whilst a cash reserve of R1,6 million was also created. Upon that SWD Cricket invested in capital improvements of R530,000 at the stadium with an additional R1,2 million that will be spend before September 2016 in preparation of the Africa T20 Cup.