Knysna – Most Plettenberg Bay and Knysna residents, who braved the icy weather, heavy rain and gale force winds to make their mark at the polls on Wednesday did so with the hope of a better future. 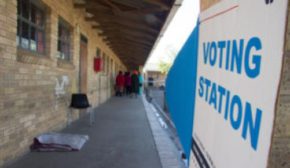 “I voted today hoping that the new leaders would bring better housing, improved service delivery and more jobs,” Aubrey Jantjies said while trying to keep warm around a fire outside the Rheenendal voting station near Knysna.

“People are sick and tired of living in horrific conditions,” he said.

These conditions have led to several violent protests in Knysna over the past few months.

In recent months, traffic had been brought to a standstill several times due to residents – especially residents of Hlalani – who had blocked the N2 with burning tyres and other objects in protests over the lack of services including running water and housing.

Jantjies’ motivation to get to the ballot box was echoed by the majority of voters waiting in queues at the various voting stations in both coastal holiday towns.

A prime example of Jantjies’ plight is Bernard Jonas of New Horizons in Plettenberg Bay. He said he had been living in acquaintances’ backyards and “in the bush” for the past 24 years.

He added that despite his trying circumstances he had made sure that he was a registered voter and had been making his mark since the dawn of democracy.

“I do so with the hope that not only my circumstances would change, but also for the many others like me,” Jonas said.

Jonas added that he had seen different parties take control of Bitou, but none have changed his situation. Bitou has always been a hotly contested area.

Before 2011 it was an ANC-led municipality and during the last local government elections became a hung council controlled by a DA and COPE coalition until a power struggle saw the DA win outright majority during a by-election in 2014.

Nelson Makaba from Kwanokuthula on the outskirts of Plettenberg Bay said he hoped to see more jobs created in the area following the elections.

“As the head of my home it is very difficult to be unemployed. My children look at me and expect me to put food on the table, but how can you do that if there are no jobs,” Makaba said.

He added that he hoped the new council – whatever their political affiliations – would make every effort to create job opportunities for residents.

Mark Donald from Knysna said he was happy with how the town was being run and wanted to keep it that way and therefore he voted on Wednesday.

Grant Peterson from Plettenberg Bay said a lot of progress had been made in Bitou over the past five years.

“We came to the polls today to make sure that the progress continues. Five years isn’t enough to bring complete change,” Peterson said.