Cape Town based five piece, Slow Jack, has made a solid impression on the SA music scene in the short time that they have been performing. From wowing crowds since their debut appearance at this year’s Up the Creek music festival in Swellendam, Slow Jack has enjoyed constant national radio play with their much talked about debut radio hit, ‘Love to Dream’ that entered the SA Top 30 at number 15 on the 5FM charts. 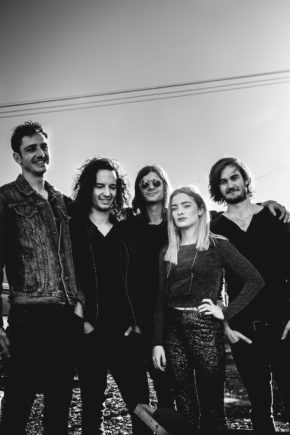 Drawing their inspiration from the city’s surrounds their music and lyrics speak of abundance, hardship and everyday life that affect us all.  ‘From a Gun’, their second single release, was actually the first song written for the Slow Jack five piece, the second being ‘Love to Dream’. Asked why they decided to release this song now, they comment that the overwhelming reaction they received to the song at Up the Creek made it an easy decision. The members of Slow Jack are Hannes Muller (vocals and guitar), Jayme van Tonder (vocals and violin), Jeandre Schultz (lead guitar and vocals), Andre Skywalker (bass) and Adrian Fowler (percussion). They are busy behind the scenes with the recording of another four songs and international interest in their music, especially from Australia, is growing.

On the composition of ‘From a Gun’ Muller comments: “The song plays around the continuous struggle for good times in love. It speaks about the many trials in a relationship and how destructive forces affect it in certain ways.”The song was inspired by lost dreams and opportunities and how the Cape gang culture permeates the lives of so many families, from wives, lovers, children to the gang members themselves. Van Tonder adds: “Love is both happiness and sorrow, but the flavour and journey should always stay inviting. In relationships and love, women suffer the most. Ultimately this song is for them.”

“.They’re loud and solid and comfortable with each other on stage. Jayme leads with her powerful voice, the rest of the band supporting her every note. Their music is a mix of pop and rock with some mysterious undertones. I like it a lot. The band has an abundance of chemistry on stage, and the five musicians showcase their talent through it.”  –Elsa La Cock from Dirty Pink City.

Slow Jack’s second single ‘From a Gun’ is now available for free download until 20 September from their website – http://www.slowjackmusic.com/.

Slow Jack 2 Photo by Driaan Claassen: From left to right: