The theme song of the movie, Eintlik Nogal Baie, will be released on 15 August 2016 and heralds the start of great things for 1925Band, who was approached by the producers to be part of this project. 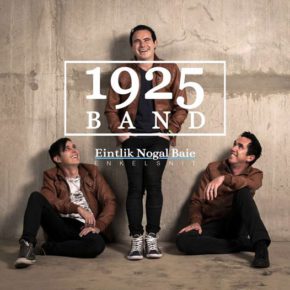 “The director and I were asked to produce a music video for 1925Band sometime ago. We wanted to learn more about this band, which mainly performs in pubs in and around Centurion. We were very impressed with their performance and their ability to harmonise, and decided to give them the opportunity to write a theme song for the movie we were working on. The first demo was breath-taking and we started working with them immediately,” says Jarrod de Jong, co-writer and producer of this new romantic comedy. “The song, which shares the title of the film, is a love story on its own, a beautiful ballad that inspires devotion in others. It is catchy and has a similar effect as that of Roxette’s It must’ve love in Pretty Woman,” he says.

1925Band consists of three musically gifted brothers, Reno, Jeff and David-Lee Gericke, who started their professional music career in 2010. They have an acoustic folk sound, and their unique ability to harmonise, together with the copious amounts of emotion they pour into each song, is what makes them such a pleasure to listen to. “We write music with heartfelt lyrics and melodies and want audiences to truly feel it. Ultimately, that is what hits are made of and what listeners can identify with,” explains Reno, the eldest brother in the band. “David and Jeff writes most of our songs and are usually inspired by everyday events, relationships and our own experiences, as well as those of others.”

David’s girlfriend is the original inspiration behind the song, Eintlik Nogal Baie. “We were asked to write a theme song for the movie and decided to adapt an existing song to meet the set criteria. The song is about how far people are willing to go to find happiness and how much you can love another person. The guy wants a girl to share his life with. He is looking for the perfect girl and when he finds her, he is happy. The song has a melody that is fresh and different. While listening to it, audiences will be able to sing along, but will also experience what it feels like to be in love, sad and excited, all at the same time,” he reveals.

The trio will soon be performing at the ATKV Applaus Choir Competition at Kruiskerk in Stellenbosch. “We will be on stage for thirty minutes every night and will be showcasing about seven songs. We are planning a combination of our own music, as well as covers of Afrikaans and English favourites. The songs we perform are usually determined by the audience’s preference. The choirs are singing Eintlik Nogal Baie for the competition, which is why we were asked to perform as guest artist. This provides us with invaluable exposure and experience.”

Although 1925Band has not officially released an album yet, their privately produced CD, Horizon, contains no less than eight original tracks. “Our favourite songs are Gedig Op Jou Arm and Eintlik Nogal Baie, because they are easy to listen to and have special meaning to us. We have also recorded a few short videos, which have been well received by the public.” They have performed at various festivals, including the Innibos Festival in Nelspruit. The band has many plans for the future, including a local and international tour, and would love to share a stage with the likes of Karen Zoid, Emo Adams and Elvis Blue. But for now, they are focusing on the wonderful challenges which have recently come across their path.

The movie, Eintlik Nogal Baie, is based on a script called Ally. Jarrod created the characters, and the story is a good combination of romance, comedy, action, suspense and tragedy. “It tells the story of Jay van Niekerk (André Lötter), an attractive, but shy, cartoonist who is firmly in control of his life. He arrives at crossroads when he encounters Ally (Marisa Drummond) with her overprotective father and ex-boyfriend, which changes his life forever, in the most dramatic way. Audiences must remember to bring enough tissues when viewing this film,” says De Jong.

Eintlik Nogal Baie is produced in conjunction with The National Film and Video Foundation and The DTI, distributed by Times Media Films and directed by Jacques Brand (The Blanket, Die Laaste Ure). The film will be screened at 16h00 on 24 August 2016 at the kykNET Silwerskermfees in Camps Bay as well as internationally at the Ghent Film Festival in Belgium in October before opening in theatres nationwide on 4 November 2016.

Like Plato,1925Band believes that music is the soul of the universe, just like their single will be part of the heart and soul of this brand new South African film.