The Garden Route is abuzz with anticipation for the 3rd Thousand Sensations Craft Beer & Food Festival set to take place in at the Wilderness Hotel in Wilderness 16 and 17 September. 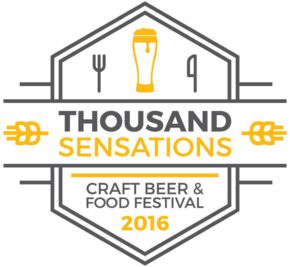 As the Garden Route’s premier event for tasting, experiencing and meeting the cream of the craft beer  industry, Festivalgoers can look forward to tasting an impressive array of 140 craft beers from 35 breweries, snacking on a delectable line-up of gourmet food, and dancing to a veritable carnival of music entertainment.

There’s also a chance to rub shoulders with the brewers themselves, and take part in activities and exhibitions. All passionately presented by intrepid event organizer, Alewijn Dippenaar and his team.

“An event of these proportions is only possible with the support of solid partners.” Alewijn revealed about the phenomenal year-on-year growth of the Thousand Sensations Festival.

The picturesque Wilderness Hotel – Resort & Spa for one, is one of the Garden Route’s oldest hotels, and again hosts Wilderness’ epic craft beer and food festival.

“PR alchemists, Interface by Goji, together with our media partners, radio Algoa FM and Group Editors, have been invaluable in spreading the word about 2016 being the biggest and best Thousand Sensations yet.”

There are other new and exciting partners involved in this year’s festival too. “The thrill of the ride”, Alewijn added excitedly about a craft of a different kind, “is one of the additional sensations that’s new among the usual thousand.”

Pure Craft Bikes are presented by BMW Lynn Schroeder Motors, and is sure to attract fans of both crafted beer and bikes.

For more information on the festival please visit www.thousandsensation.co.za of visit our facebook Thousand Sensations.  Tickets can be booked through Ticketstroom