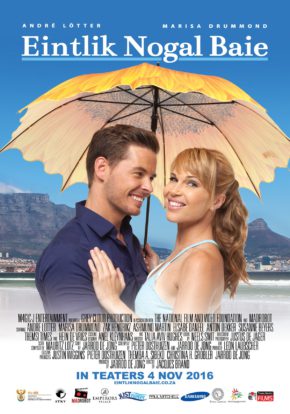 Eintlik Nogal Baie is based on the screenplay, Ally, created by Jarrod de Jong (The Blanket, Die Laaste Ure, Babalas).

“With an intimate cast of seasoned actors, Eintlik Nogal Baie‘s storyline is loaded with a good balance of romance, comedy, suspense, tragedy and full of charisma,” says de Jong. The story is about Jay van Niekerk, an attractive, but introverted comic book animator who has his life meticulously planned out. Life catches up with him and brings him to a crossroad in his life when he meets Ally and his life is changed forever in the most dramatic way. “Viewers should definitely bring enough tissues,” adds de Jong.

De Jong will be attending the opening of the Film Fest Gent in Brussels where Eintlik Nogal Baie will be shown on 11 October 2016.  During November 2016, Eintlik Nogal Baie, will also be screened at the Razor Reel Flanders Film Festival in Belgium.  This festival offers an opportunity to new film makers from the international market.

The theme song, sung by the 1925Band was released on 15 August 2016 and can already be heard on radio stations across South Africa.  They were approached by the producers to be a part of this project. “The song, which shares the title of the film, is a love story on its own, a beautiful ballad that inspires devotion in others. It is catchy and has a similar effect as that of Roxette’s It must’ve been love in Pretty Woman,” says De Jong.

1925Band consists of three musically gifted brothers, Reno, Jeff and David-Lee Gericke, who started their professional music career in 2010. They have an acoustic folk sound, and their unique ability to harmonise, together with the copious amounts of emotion they pour into each song, is what makes them such a pleasure to listen to. “We write music with heartfelt lyrics and melodies and want audiences to truly feel it. Ultimately, that is what hits are made of and what listeners can identify with,” explains Reno, the eldest brother in the band. “David and Jeff write most of our songs and are usually inspired by everyday events, relationships and our own experiences, as well as those of others.”

Eintlik Nogal Baie is produced in association with MadRobot, The National Film and Video Foundation and The DTI and is distributed by Times Media Films. The film will be screened at the kykNET Silwerskerm Festival on 24 August 2016 at 16h00.