Johannesburg (5 September 2016) – Tumi Morake proved this past weekend that you can have your cake and eat it…and have seconds! 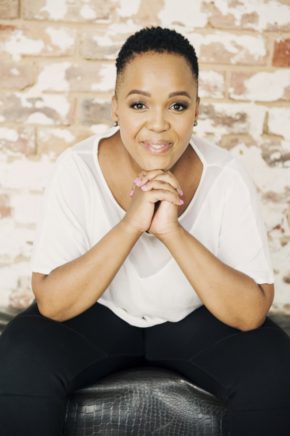 It’s not an easy feat going up against talented comedians like Carvin Goldstone, Loyiso Gola, Mashabela Galane and Skhumba Hlophe.  But Tumi Morake, SA’s “First Lady of Comedy”, made history this past Saturday, by being the first ever female to be crowned ‘Comic of the Year’ at the 6th annual Savanna Comic’s Choice Awards.

“I won!  I didn’t know how much I wanted it until I won it!  I wouldn’t have had the guts to do this, without the support of my fans.  And a big thank you to the comedy fraternity.  There are very few women playing in this game and the fact that these guys have taken notice, it means a lot!  Now the Queen shall truly reign!”

The hilarious variety show was held on Saturday, 3rd September at the Teatro at Montecasino.

Walking onto stage, Tumi definitely dressed the part!  Draped in a dramatic cape and gorgeous black gown, Morake was honoured and humbled at being recognised by her peers.  The award – proving that Morake is a formidable force in this male-dominated industry – follows on her recent win of Best Comedian at the 2016 YOU Spectacular Awards.

When asked about her upcoming plans, Tumi replied: “Can you believe that after 10 years doing stand-up, I still haven’t toured my own show?  There’s no better time than now.  I’ll be hitting the road later this year with the biggest one-woman show to hit African shores!”  Tumi will be performing all over South Africa and will also be crossing borders and taking her show to other African audiences.

Since beginning her comedy career in smoky clubs in 2006, she has steadily grown into one of SA’s most sought after comedians.  Her edgy and unpredictable brand of comedy has wowed audiences around the globe.  She has shared the stage with the likes of David Kau, Marc Lottering, Barry Hilton and Chris Forrest and has earned her place as headliner in comedy festivals such as the Kings & Queens of Comedy.

She’s bold, she’s sassy and you simply cannot ignore her!  Some other highlights of her career include being the first woman to host Comedy Central presents on African soil and ticking off a bucket list item – taking her one-woman show to the famed Edinburgh Festival in Scotland in 2013.

Tumi Morake is a “jane-of-all-trades”.  Beyond her comedy, Morake has been the face of major campaigns with Vodacom and Kellogg’s.  As a producer, her work has been nominated in various categories at the South African Film and Television Awards, which she also hosted in 2013 and 2014. She also hosted the prestigious SAMA Awards (Night 1) in 2012 and 2013.

Morake has also had some critical recognition thrown her way. From being named one of The Free State Province’s Icons, to the Entertainer of the Year at the 2012 Speakers of Note Award. The Tarantino of comedy, Tumi’s crowning glories have been her nominations for coveted Comic of The Year at the 2013, 2014, 2015 and 2016 Comic’s Choice Awards. She is a recipient of the Mboko Women In The Arts Award for Excellence in Comedy 2013. 2015 saw her nominated in the Glamour Woman Of The Year Awards. She was recently voted You Spectacular Favourite Comedian.

Morake’s continental claim to fame began as the host of The Big Brother Hot Room, a comical round up of Big Brother Africa. She also spent two seasons on the judging panel of etv’s She’s The One. Her star continued to rise as host of the ever trending Our Perfect Wedding for a record 3 seasons after a public demand for her return.

For bookings or enquiries, email info@blublood.com.  For publicity queries, email monica@mspublicity.co.za or 082 452 2095.