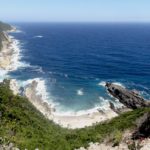 Most areas in the Western Cape can expect at least a 30 percent chance of rain with a much higher chance of rain over Cape Town and some other areas.

Rescue services have warned Capetonians to keep a safe distance from the coastline as rough seas continue to hammer some beaches.

National Sea Rescue Institute (NSRI) spokesman, Craig Lambinon, said: “The most important thing to say this time of year is that sea conditions are still winter conditions. It’s rough even when the weather is sunny. People must be cautious around the coastline as summer is approaching.”

At the weekend, an NSRI team was called out to the Hermanus dam after a sailing boat capsized because of the strong winds. Two sailors were trapped in the sailing boat and only after extensive efforts, they were saved.

In St Helena Bay on Saturday, another team in Mykonos were called after a small crayfish boat was swept out to sea in Laingville with three children on board. The children were eventually rescued.

Charlotte Powell from the City of Cape Town’s Disaster Risk Management said that although there were no immediate flood warnings issued, her team were checking on vulnerable communities in informal settlements.

A number of houses in Hangberg in Hout Bay were destroyed in a fire over the weekend.

City Fire and Rescue spokesman Theo Layne said the fire had started just after 3am on Saturday. No injuries or fatalities had been reported, but an estimated seven informal structures had been destroyed by the blaze, he said.

Meanwhile, nine people were evacuated from their homes after a raging fire spread through part of the Middle Keurbooms Private Conservancy near Plettenberg Bay, last week.

The Southern Cape Fire Protection Association spokesman said the fire, which swept through 10 000 hectares of land, had been stabilised and mopping procedures had started.