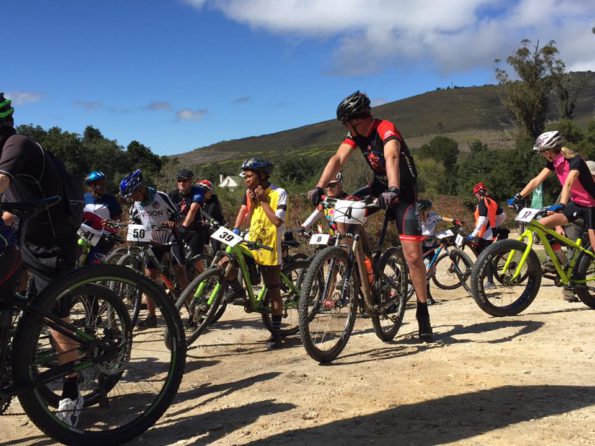 The Park Manager for the Garden Route National Park, Paddy Gordon says ‘we’re finding creative ways to make people feel more welcome in the Park during SA National Parks Week. If cycling is the new golf, then we have found ways to upgrade existing trails to suit the entire family.’

The Park’s motto is ‘adventure is in our nature’ which is in line with the SANParks mandate of connecting society to National Parks.  75 cyclists tested the gold nugget route today, the race was divided into (5km, 7,5km and 10km). There are already 10 trails in the Park mainly in Harkerville for experienced riders and the gold nugget targets junior riders as well as beginners. It’s scenic and beautiful set in the middle of the forest with ocean backdrops and fynbos. Goudveld is an old mining town in the middle of the forest.

Winners for the 5km race

Winners for the 7,5km race

Key ranger in Goudveld, Dominique du Toit says Goudveld is fascinating for its biodiversity and its rich history.  ‘Back in 1876 gold was discovered by James Hooper along the Karatara River. Later in 1887, more discoveries were made in the nearby Millwood area. Millwood in those days had  hotels, a church, a shop, a surgery, a bank, school and a Post Office.   The two remaining houses from that era are used as a museum to showcase the area’s cultural history as well as a restaurant (Materiolli or Mother Holly). The goldfields are also still visible.’

This area is also where most of the woodcutters lived until they were removed from the forests in 1939. Renowned author, Dalene Matthee writes much about the lives of woodcutters.

Goudveld is a popular hide-away is 22 kilometres from Knysna, in Bibby’s Hoek to be exact. It is part of the Garden Route National Park (GRNP) afromontane forests, the largest continuous indigenous forest in South Africa. It is located on the lower slopes of the Outeniqua Mountains with a magnificent variety of fynbos, birds, amphibians, reptiles and mammal species.

All three Parks have free access events planned every day from the 11th – 17th September 2016 from guided hiking to bird and seahorse talks. Please visit the Park’s website to download a Programme: https://www.sanparks.org/parks/garden_route/ or on social media.