Though the festival was plagued by rain showers, I think we can vouch for everyone by saying the weekend was still a roaring success. Everywhere you looked there were smiling, laughing faces, glasses in hand. 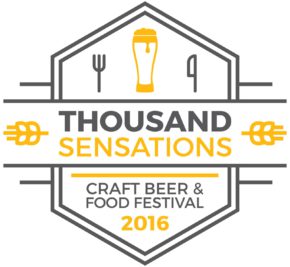 We decided to go on the Saturday, so we could spend a good few hours there.Ever since the Outeniqua Hops Festival in Feb, we’ve been on the look out for something similar. So when we read about Thousand Sensations, no way were we gonna miss this!

Ever since the Outeniqua Hops Festival in Feb, we’ve been on the look out for something similar. So when we read about Thousand Sensations, no way were we gonna miss this!

Kudos to the organisers for having it indoors – a safe bet with George’s notorious September weather!Leading up to the big event, local eateries around the Garden Route had been hosting.

Leading up to the big event, local eateries around the Garden Route had been hosting beer tasting events, so we were eager to get in on some of the action too! 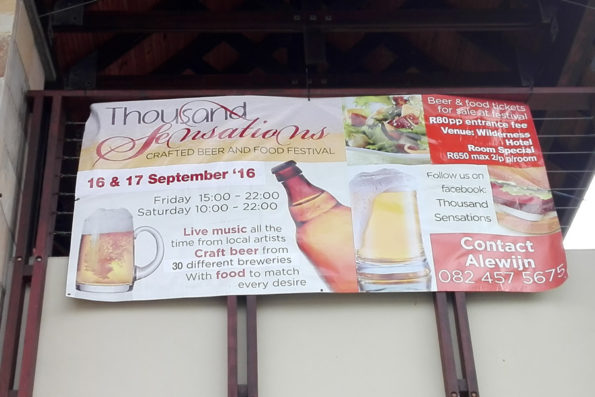 Personally, we felt the festival was well-organised, friendly and had a really good blend of beers, ciders and even iced teas! The only small drawback would be that it was a bit cramped. With so many stalls, so many eager visitors and so much on going on, queues were going to be unavoidable. I can definitely see this being taken outside, in a big open space. However, that being said, everyone was friendly and polite, as we wound our way through the stalls, debating where to spend our tokens.

As we each received 5 {!} with our entrance fee {R80; R120 weekend pass}, it dawned on us that we actually had 10 times the opportunity of tasting some really excellent craft beer! And since the breweries were SO generous with their tasters, this was a really brilliant move.

All the craft guys and girls were lovely – friendly and welcoming, keen to share their knowledge of some of the best and most delish craft beers in SA.

At some stalls we were fortunate enough to sample practically everything they had on tap {thanks Mitchell’s Knysna and Toni Glass!} – all with one token. Hey, you don’t hear us complaining! And thanks to the champions from Woodstock Brewery, we got to take some lovely craft goodness home with us, to enjoy at our leisure. Cheers, guys!

We started off with the Urban Brewing Co, whose friendly faces and awesome design caught our eye. With cool skulls everywhere, we couldn’t pass them up. We tried their Dungeons Stout, which was great – lovely, rich flavour, like a coffee and choc blend.

But with 8% alcohol, maybe best be sticking to one bottle!

These guys haven’t been going for very long, but with their cool look and great attitude, I’m sure we’ll be seeing them around some more.

Craft cider isn’t something we had tried before, and when we spotted a mulled cider in the line-up, that was it: we had to try Everson’s.

And it was so. good.
Not something you’d have on a warm day, but a perfect winter drink, enjoyed in front of a roaring fire {or indoor braai}.

With notes of cinnamon and vanilla, we concur with our frank and entertaining Everson’s expert – this is probably what it would taste like if you could bottle Christmas.

In amongst all the locals, we found Leopold7, all the way from Belgium.They only do one craft beer and they do it well – an amber ale that’s 6.2% alcohol;

They only do one craft beer and they do it well – an amber ale that’s 6.2% alcohol; strong and proper stuff, this.

Origin: Belgium
Between two stations, Growler and Innis & Gunn {Scotland}, we somehow got persuaded to try the lighter Growler first. A fruity blonde ale, clocking only 4%.

While we love a good and proper beer, those light ones can also be delicious.

BTW – Innis & Gunn specialise in oak-aged beers – including one with a rum finish.

What a rum affair!

At Mitchell’s {drum roll for Knysna!}, we got chatting and ended up trying everything!

Their 90 Shilling spicy ale is a great inbetweener – at 5%, it’s a proper drink, yet not too heavy.

We would highly recommend their Raven Stout – but then again, we are partial to the dark ones!

As for their Milk and Honey Sweet Ale, we would have to respectfully agree with the general consensus here: either you like it or you don’t. We didn’t so much. {Sorry guys!} But their light lager more than made up for it.

And after cracking open a bottle of Old Wobbly Lager {a cool 7%}, we had to admit – even though we might still not know where the hops hits first, Mitchell’s can brew some seriously good beer.

BTW – their Forester’s is really famous – definitely give this a try as well.

You can take a tour of the Mitchell’s Brewery at R75 per person, where you get to taste their craft beers, and take one home at the end.

A surprise lay in store for us at Windermere: elderflower cider. In one word: delicious. To elaborate: simply delicious. No wonder they had sold out! We were just lucky to get a taste!

Really lovely, with a sweet taste, you’d be forgiven for mistaking this for nectar!

After that, their rooibos-infused cider was, well, nothing to shout about.

Origin: Elgin {no surprises there}

Spotting a gap in the most-populated area of the festival, we headed for Woodstock Brewery. And we’re very glad we did!

Being a fan of TV show Californication, I had to let hubby try their Californicator {sounds hectic, I know} – which turned out to be a harmless and lovely smelling American IPA {that’s Indian Pale Ale to you and me}.

They had some pretty interesting names on the rest of their merchandise, and after being presented with a box of their craft goodies, we will become better acquainted with the likes of Hazy Daze and Pot Belge. Hooray!

Robertson Brewing Co – Having already tried their Reggae IPA, and needing a bit of break from the heavy stuff, we had a taste of the Rhythm & Blues – a light blonde ale with a hint of sweetness.

Keep a look out for their other music-inspired beers, such as Country, Soul and Jazz.

Find them at 1 Memoriam Street, George. Have a bite to eat at fittingly called Bite Restaurant – delicious burgers on the menu!

Fruity ciders a-plenty at Sxollie – take your pick between a dry or a sweet apple cider, or an interesting pear cider. Perry cider, made using Packham pears, was a good palette cleanser after a few too many beers!

With a lovely caramel taste and only 4.5% alcohol, this could be a good choice of summer drink.

Origin: Elgin {where else?}

Thinking a beer festival is only for alcoholic beverages? Think again!

We sampled some not-your-average iced tea from the masters of classy tea, Toni Glass.

And with original flavours like Lemongrass, Coconut and Ginger, as well as Kiwi, Cucumber and Mint, along with their funky-looking packaging, you’d still look cool drinking this in a pub.

This was one entertaining experience and we left several hours later, impressed with the craft beers, etc. we had tried, the organisation at the event and the affordability – not even the iffy weather could dampen the good vibes!

And though we didn’t get through quite a thousand sensations, I think we came close enough!

Cheers to the next one, guys!

About the I Heart Eden Team

Whether it’s a spectacular festival or a cosy eatery, we want you to know about it!

Join us on our travels as we bring you all that is best in this slice of Paradise.