Karen Zoid, South Africa’s undisputed Queen of Rock, is ready to knock your socks off with a very special one-night-only performance at the Artscape Opera Theatre. 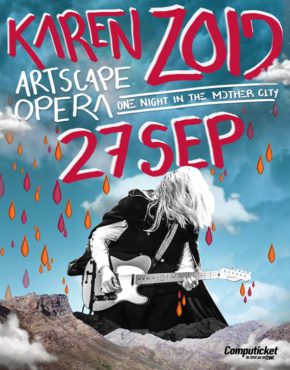 Zoid says: “To do a solo show at the Artscape Opera Theatre definately is a career highlight. It feels unbelievable to have this whole, incredibly beautiful theatre to myself! I remember the first time I walked into such a big theatre when I was a little girl. Janice Honeyman was on stage busy with a musical and I remember thinking: “wow, imagine me singingzz on a stage like this one day.” So for me this is more than just a show, it is a dream come true!”

Zoid`s electric energy and diverse voice will take you on a journey featuring some of her unforgettable English and Afrikaans hits through the years. Songs like ‘Afrikaners is Plesierig’, ‘Engel’, ‘Small room’, ‘Aeroplane Jane’, ‘Want as ek droom’ and many more of Zoid`s incredible tunes will leave you inspired and entertained. Zoid will be on stage with her band: Henry Steele, Tim Rankin and Schalk van der Merwe, with Kyle Peterson on piano & keytar.  She says: “It is Spring in Cape Town, romance is in the air, you can come and listen to music and hold hands in the dark.”

Zoid`s popular kykNET television series, Republiek van Zoid Afrika, won a SAFTA earlier this year in the category: “Best Television Talk Show.” The fourth RZA series will on the air from 11 October, 20:30  every Tuesday on kykNET.

All three Republiek van Zoid Afrika albums have reached gold status in sales. Zoid has also had major success on iTunes and YouTube in 2016. She has made SA music history by having had 10 songs in the no 1 position on SA iTunes. These songs are respectively from the Republiek van Zoid Afrika Volume 2 and 3 albums. The hit single “Toe Vind ek Jou” with Francois van Coke and Karen Zoid has had more than two million views on YouTube up to date.

Don’t miss this exclusive Artscape concert. It is going to be a very special night!