Huisgenoot, in association with kykNET Films, produced the romantic drama, Vir Die Voëls, as part of their centenary celebrations in 2016. 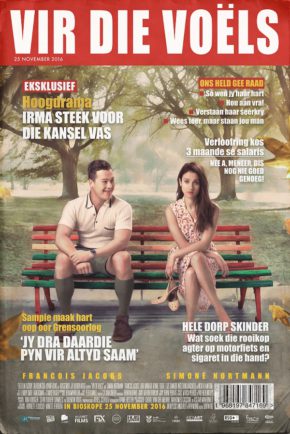 The official trailer was launched on Thursday,22 September 2016.

Vir Die Voëls was inspired by the true story of Irma Humpel (Simoné Nortmann), a surly tomboy who ends up in a wedding dress, in front of the altar, with the boy who relentlessly teased her as a child. She has always believed that independence was the only form of freedom, until Sampie de Klerk (Francois Jacobs) came along and challenged her convictions on all levels.

“This is my first movie and it still feels surreal. Working with Quentin Krog and other experienced actors has definitely been one of the highlights of my career. This heartfelt story addresses universal themes and I know that the public will fall in love with Irma and Sampie,” says Simoné.

“It has been a great privilege to be part of such a huge project,” Francois says. “You seldom get the opportunity to ‘star’ in the era in which your parents grew up! I think Huisgenoot got a great team together to tell this story. It was an absolute pleasure working with such talented people. This must-see film will appeal to a broad audience – young and old. People, who grew up in that era, will be able to revisit the past . . . and youngsters will be able to experience how things were done back in the ‘old days’. The movie will take you on a rollercoaster ride of love, hurt, happiness, disappointment and humour.”

Vir Die Voëls is set in the late 1970s and will make you feel nostalgic. It’s a film about a strong, mature woman and an equally strong man who respects that woman enough to fight for her love. It’s a story about inner conflict and preventing external circumstances and emotional baggage from getting in the way of future happiness.

“I’m excited about the audience that will be watching this movie,” says Quentin Krog, director of the film. “I’m also excited about the idea of taking them back to another era; to make them laugh, cry and fall in love. To entertain them.”

Vir Die Voëls was produced, in associations with kykNET Films, by The Film Factory and the cast includes the likes of Elize Cawood, Nicola Hanekom, Neels van Jaarsveld, Drikus Volschenk, Leandry Smith, Liam Bosman, Lara Kinnear, Candice Kruger and Bennie Fourie. The movie will be released on 25 November 2016 and is distributed by Ster-Kinekor Entertainment.