One room in every Radisson Blu hotel will get a pink makeover in October.  €10.00 of guest revenues per night will support breast cancer research and awareness. 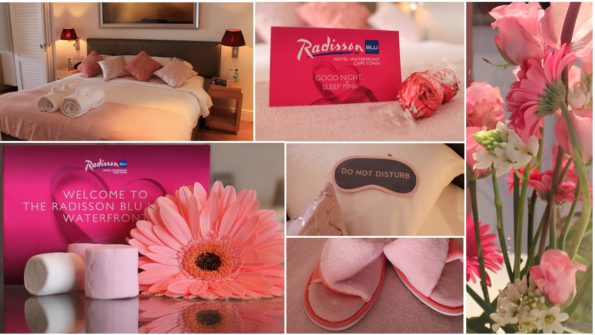 Radisson Blu®, the iconic hotel brand driven by innovation and design, is launching “LOVE BLU, BE PINK!” campaign where one room in each hotel across the globe will turn pink for the month of October.

The pink Business Class guest room will feature pink décor and other special pink amenities. A portion of the proceeds from the sale of the pink rooms will benefit charities that support breast cancer research and awareness.

“Radisson Blu is pleased to announce its support in the fight against breast cancer,” said Rose Anderson, Vice President, Global Branding, Radisson Blu. “In partnership with our guests, we look forward to raising funds for breast cancer research and awareness.”

Pink Business Class rooms are available for booking for stays from 1 October 2016 through 31 October 2016 at participating Radisson Blu hotels worldwide. Hotels across the globe will support organizations that are committed to breast cancer research as well as awareness. For a list of organizations that will benefit from the “LOVE BLU, BE PINK” proceeds, visit RadissonBlu.com/bepink.

Radisson Blu® is one of the world’s leading hotel brands with nearly 300 hotels in operation in 69 countries and territories. Radisson Blu’s vibrant, contemporary and engaging hospitality is characterized by a unique Yes I Can!SM service philosophy, and all of its first class hotels offer a range of signature features that are empathetic to the challenges of modern travel, including the 100% Satisfaction Guarantee. Distinguished the world over as the brand with Hotels Designed to Say YES!SM, Radisson Blu offers a vivid visual celebration of leading-edge style where the delight is in the detail. Radisson Blu hotels are located in prime locations in major cities, airport gateways and leisure destinations across the world.