The traditional Windhoek Oktoberfest Cape Town brought to you by Namibia Breweries promises a perfect combination of great German food, games & activities, world-class entertainment and excellent Namibian beer, brewed according to the Reinheitsgebot, the 1516 Bavarian Purity Law. Friday night is for over 18`s only and on Saturday you can bring your kids for a great family day out. 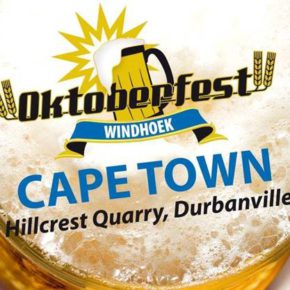 Highlights over the weekend, amongst others, include the 500 years celebration of the Reinheitsgebot and performances by the Kirchdorfer band. They have been the official band in the “Hacker-Festzelt” at the Oktoberfest in Munich since 1994 and will be flying in straight from there to perform at the Cape Town Oktoberfest. Typical to a traditional fair, there will also be lots of games of which the most prominent are “Stamm-sägen” (Log-Sawing); “Bierstemmen” (Beer-Lifting);“Hau den Lukas” (High Striker ); Nageln; Beer Pong and Catty shooting.

Members of the MatieKa will be hosting the traditional games at Windhoek Oktoberfest. MatieKa is a German Carnival hosted in Stellenbosch. It started in 1975 where some students decided to celebrate a German Carnival. Herewith some more information on how some of the games originated and how they work:

Hau den Lukas: This is a game where one strikes with a hammer onto a button which then hurls a metal ball up a rail, depending on the impact force. The harder you hit, the faster you will reach the top to hit the bell. ‘Lukas’ plays in many Disney movies such as Popeye, a roll in which strength is measured.

Baumstaemm saegen: It is a traditional German wedding game, where the Bride and Groom saw together through a piece of the log. This encourages teamwork to ensure the couple can stick together during a difficult task. At Oktoberfest the same is practiced however it is not based on a groom or bride. Her friends, families’ etc. can saw together through a piece of the log and the time is being recorded. The best will be selected and finalists will have an opportunity to saw again to compete for the record.

Naegelstamm: Nailing competition at events was known since the 1920s. This is used for new married couples to show the audience their skills in the German tradition. Each person involved in the Game gets a nail which they are allowed to hit in lightly into the stem before the game starts. Clockwise each person gets the opportunity to hit in the nail until the nail is completely in the stem. You are only allowed to use the tip of your hammer. The person who hits in the nail into the stem first has won the game.

Tickets are R120 from Computicket and R150 at the gate.

Competition: If you book through Computicket, you automatically stand a chance to win an all expenses paid trip to the Windhoek Oktoberfest 2017 in Windhoek.  The prize includes flights, accommodation and entrance to the Oktoberfest)

Friday no under18`s and Saturday is family day. Kids under 12 free entry on Saturday. Gates open Friday 18h00 till late and Saturday 10h00 till late. Contact no for queries: 021 551 3683 or email info@eventsandmore.co.za

Corporate Tables for Friday night: The Friday night programme does not allow any under 18`s, which makes it an ideal opportunity for a corporate get-together. Corporate bookings can be made via Judy at info@eventsamdmore.co.za. R1500 per table (seats 8) –Corporate tables will each have a dedicated VIP waitress. Food and drinks to order.