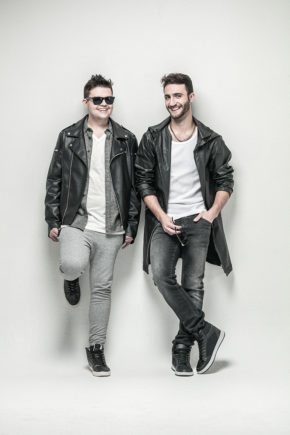 RO, consisting of 21-year-old Leandro Coimbra and 18-year-old Jethro Finch, met just over a year ago when both were performing at a local school awards ceremony. Leandro and Jethro immediately realised they had a mutual passion for catchy, hook-driven pop songs. From that time onwards they spent many hours together honing their songwriting skills and blending their distinctive and contrasting voices, while sharing a vision to create memorable, radio-friendly pop anthems.

In November 2015 Jethro contacted Dave Thompson, ex-Sony Music Africa Head of Marketing/A&R and five season Idols judge then living in Perth, Australia. He was immediately blown away by the demos created in Leandro’s home demo studio.

Dave flew to Johannesburg a few days later and, after listening to more work in progress, offered the then-unnamed duo a deal with his brand-new record label, Boom.Studio, co-owned by Mortimer Harvey, an independent, OmniChannel consulting, marketing and integrated communications company.

Within a few days Leandro and Jethro were in the studio with the award-winning production team of Crighton Goodwill and Brian O’Shea recording their first single, What You Like, which was quickly followed by Fall. What You Like went to radio in March 2016 and soon achieved airplay across radio stations nationwide.

Off the back of What You Like, RO’s second single Fall gained immediate traction and is currently playlisted at over 20 radio stations, including 947 Highveld Stereo, 5FM, ECR, KFM, YFM and Jacaranda 94.2.

Between February and August 2016 RO continued to work in the studio with producers, Byron Kuntz and Paul McIver, crafting the other eight songs that make up the balance of their debut CD, The Daydream Club, released on 14 October. The CD is also available across various digital platforms, including iTunes. Says Thompson, “RO is highly focused and always working towards perfecting their craft. They have achieved amazing results in a very short period of time, and are only just getting started.”

RO says, “Good enough isn’t enough; every song we’ve written has a secret meaning that only we know. Fans have to decide for themselves, because music is personal.” Multitalented Leandro (keyboards/vocals) and Jethro (guitar/vocals) have also lent their songwriting and production skills to other Boom.Studio artists, including Lucille Slade and Nopi.

“Now with significant support on radio and a video for Fall available, RO is looking forward to performing live at venues across the country and on television” says Thompson.

Boom.Studio challenges the traditional way record labels manage their artists, create music and handle marketing. It offers the full package – a platform for creativity to flourish, while bringing artists and their fans together. In short, it’s a record label that has no limits. Boom.Studio is about pushing artists, creating music that’s made for real people and driving brands into people’s lives.

The record label is co-owned by Mortimer Harvey, an independent, OmniChannel consulting, marketing and integrated communications company. For brands that understand the importance of music and entertainment marketing, Boom.Studio is a fast track to the hottest new talent, with white label and e-commerce facilities to enable clients to distribute the music their customers want to hear.