Elegantly presented in a golden gift box, it makes for luxurious cork-popping and a striking gift 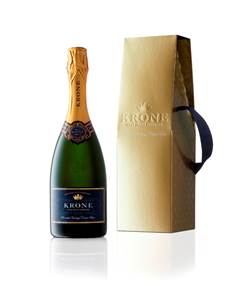 Krone, vintage Cap Classique masters from the historic Twee Jonge Gezellen Estate in Tulbagh, are adding an extra touch of festive flair to your celebrations this year: presenting their Krone Borealis Vintage Cuvée Brut in a stylish gold embossed box with a ribbon handle.

Retailing nationally at approximately R110, this timeless, beautifully showcased Cap Classique will make for luxurious cork-popping and a striking gift.

Produced in Krone’s historic underground cellar, this blend of Chardonnay and Pinot Noir, handpicked in the cool of the night, is pleasing with every sip. Made in the traditional Méthode Champenoise style, this elegant Cap Classique’s exceptionally fine mousse contributes freshness and finesse. A classic biscuity bouquet with hints of jasmine and fresh apple notes follows onto a rich lees-creaminess on the palate which allows the pecan nut and sweet pear flavours to fill the mouth and fade away in a refreshing finish.

Following on from Krone’s tradition of hand-picking their grapes under the stars to retain flavour and aroma, the Krone Borealis was named after a constellation of stars called the ‘Corona Borealis’. Legend records that Bacchus, God of Wine in Greek mythology, fell in love with Ariadne, daughter of the King of Crete. In order to uplift her spirits and prove his love to her, he threw her golden crown, a circlet of gems, into the heavens where it remained to shine forever as the dainty constellation of stars called CORONA BOREALIS. Corona means crown, as does Krone – hence KRONE BOREALIS, – the Cap Classique that is full of ‘stars’.

The historic Twee Jonge Gezellen farm in Tulbagh is the home of Krone, a collection of notable, vintage-only South African Méthode Cap Classiques made from grapes grown in this distinctive terroir and harvested in the cool of the night. Open to the public for tastings and tours, the farm is currently being restored to reflect its impressive heritage and contemporary renaissance.