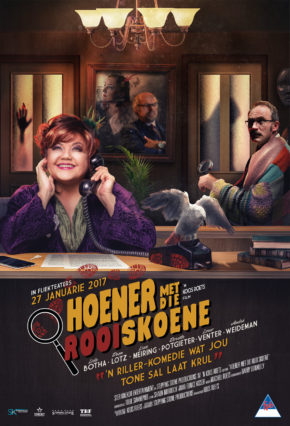 It’s not a children’s movie or a fairytale; neither a drama, but a thriller-comedy from renowned director and producer, Koos Roets.

“It’s an unusual, funny and clever murder mystery filled with unexpected twists and turns. It will keep you on the edge of your seat whilst laughing uncontrollably,” says Lizz Meiring, who is seen in the role of Bonnie van der Byl.

Hoener Met Die Rooi Skoene is magical and original with a cast of unique characters, perfectly suited for the film setting – Klaarstroom, a gem hidden in the heart of the Klein Karoo.

Bonnie is a receptionist at the internationally acclaimed De Waal Theatre Group. Whilst chatting away on the phone, as per usual, her boss, the successful, but unpopular businessman and impresario, Du Toit de Waal (Deon Lotz), is murdered.

Bonnie discovers him on the office table behind her with a dagger in his back.  She phones the police and then goes closer to the body to inspect the situation.  And of course, she collapses, as she always does.  She is woken by the flashlight of Constable Mickey Mentz (André Weideman), only to discover that the body is nowhere to be seen.

The perfect setting for a “who did it?” murder mystery filled with unexpected moments of laughter, twists and turns, orchestrated by Bonnie, her parrot Napoleon and the irritable, flammable, moody inspector, Captain Hendrik Greyling (Louw Venter).

When all the characters and their dirty secrets are brought together for cross examination, weird and wonderful secrets are revealed.

Cecilia de Waal (Dorette Potgieter), the attractive, young wife of the boss, has more than one affair. The boss’s private secretary, Miss Enith Conradie (Lida Botha), reveals that she has been in love with him for years.  And if that is not enough, the flirty Roxie Roos (Laré Birk) is exposed as the boss’ less willing entertainment on the side.  The charming Percy Cilliers (Geon Nel) is totally useless and doesn’t do a stitch of work and the older clerk, Harold Berrington-Smith (Flip Theron) is a ‘tail gunner’.

Whilst this storm is brooding, the ‘corpse’ appears out of the blue – fit as a fiddle.

“I didn’t make this movie to teach people serious life lessons. There is enough nonsense going on around us. I just want to offer viewers the opportunity to come, sit back, relax and enjoy. And laugh out loud. But that being said, it is not a typical slapstick comedy with people throwing each other with pies. And of course the boss that re-appears when you least expect him,” adds Koos jokingly.

“The characters are real people, people that you and I know.”

His last movie was the popular, ‘’n Pawpaw Vir My Darling”.